Are You Ready for Texas? 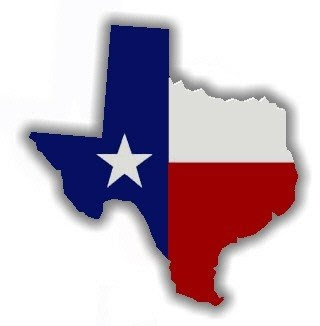 That's the question that I wondered when I made the move here last month. I had lived in California for 25 years and moving here felt like I was moving to a foreign country. Even though both are large western states with a strong Hispanic influence, the similarities stop there. In California I could easily get around and knew the short cuts to take when traffic was bad (which it often was). If I was going to someplace new, I could do a quick Mapquest to get a visual idea of where I was going.

That won't work in Texas! The exits off the freeway, that parallel it are one way. They also have what are called turnarounds which are quick ways to do a u-turn and avoiding stop lights by using a curbed side road. Not fun when you were just trying to make a left turn and got into the wrong lane. But let's just talk about the basics of traveling about -- I don't even know where the freeways are and where they go! So my first purchase in my new state was a GPS system. That at least gives me a sliver of confidence in getting around. I may not know where I'm going but at least I'll get there!

Most of my time in my new home is spent in taking classes online so I can get retrained to work in a new job here. For now that means I'm not doing a whole lot of traveling about except on weekends. Then my husband and I share the excitement of finding where things are and what there is to do for fun and sightseeing. We're still not settled in, but we're starting to feel a part of this Southern hospitality.

Here's what we've found that we like about driving around Texas and how it's different from California...

1. There is actually vacant land between the major cities. In California one city just blends into the next. Of course being in Texas means you have to make sure you have enough gas; if not there are gas stations along the way even without any established towns.

2. The highway slogan that says "Texas -- drive friendly." Friendly is not how Californians drive. Try getting on the freeway in CA during rush hour and you'll know what unfriendly is. When I've gotten myself in the wrong lane in Texas, folks have let me make the change I need without lots of honking horns.

3. Subdivisions with traffic signs that show "25 miles per hour" that the locals actually obey. They want to make sure children or adults stay safe if they vere into the street. Part of it is concern, the other part is that if you don't there is a good chance you will get a ticket. I've seen this happen in my subdivision twice since I've been here.

There's more that I like about Texas but I'll leave that for another post. What are the things that you like about where you live?
Posted by Christine L.Henderson at 7:00 AM

Email ThisBlogThis!Share to TwitterShare to FacebookShare to Pinterest
Labels: driving, moving, traveling around