New Meaning of the Term "Quartered" 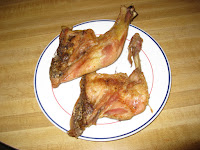 Just recently moved into a town where there is a Walmart superstore. I needed something for dinner and decided to get some chicken leg quarters because they were a good price and easy to fix. In the Styrofoam tray they looked like any other chicken. But when I got them out of the package I was in for a surprise. Yes, they were a leg and a thigh combo but they were a shaved version of the normal pair. They looked like flattened road kill. For some reason the butcher sliced off about 25% of the back of the legs and thighs. Instead of the chicken pieces being about 3-4 inches thick they were indeed about 25% less in thickness.
I tried to show it in the pictures. Unfortunately, I don't have 3D HD but I will try to explain. If you look at the bones they are sheered through. I have never had this occur in chicken before. Did they have a new butcher who didn’t understand what he was told when asked to put the leg and thigh into quarters? Did he think you slice both bones horizontally? 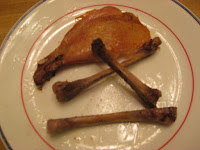 Or we have the next question. Is this a new way to sell leg quarters so that they will cook quicker? But then what do they do with the other portion which is mostly bone? Is there a need to buy partial chicken bones like you would buy beef bones for a dog? Or was it simply that the butcher sneezed when he was slicing and it only mis-sliced these few portions of the chicken. Inquiring minds want to know.
Have you ever purchased something that was truly an odd “second’? What’s your story?
Posted by Christine L.Henderson at 9:22 PM