A Tale of Puzzling Mystery: Author Interview with Sherban Young 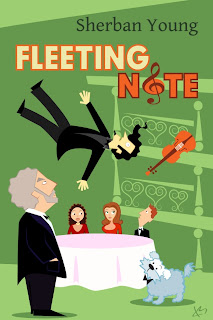 This is my second interview with Sherban Young who writes delightful mystery plots and puzzles. But don't take it only from me. Fleeting Memory was named to Kirkus Reviews’ Best of 2011, and Fleeting Glance received a starred review (reserved for books of exceptional merit).

Since we last visited you’ve published three more books. What have you learned in that time frame to improve your writing or marketing skills?
I think it’s a matter of getting comfortable with your characters.  I’m very comfortable in the series I’m writing at the moment (the Enescu Fleet series).

As for marketing, sometimes I feel I haven’t learned much.  I’ve probably learned what not to do more than anything.  It’s different for everyone but I’ve found that certain approaches, such as buying advertising, were a waste of my time (and money).

What do you see as some of the best ways an author can improve their social media platform?
I’m probably not the best person to ask, since I’m awful at social media.  I think it helps if you already use and enjoy social media.  I don’t.  The best advice I can offer is always keep social media at the forefront of your mind.  Include it in your email signature, press releases, etc.  Probably not ignoring it, as I tend to do, is a good idea as well.

How long does it take for you to complete a book now as opposed to your first or second book?
My first two books each took approximately two years to write.  My most recent book, Fleeting Note, took about six months.

When working with your editor, is there any one thing that you are constantly being reminded about doing?
I’ve found that using a professional editor or proofreader is essential.  No matter how closely you go over something, there are always going to be errors you miss when you’re reading your own work.  Your mind just fills in the correction.

How do you write? Did you do individual character development before doing the full plot?
For the Fleet series, I always start with the theme of the book.  For instance, the first book was literature, the second art and the third music.  From there I work on the puzzles tied to that theme.

Since it’s a series, a lot of the character development carries over from the previous books.  On the whole, my stories are more character driven than plot driven.  I build from the inside out.  I build the plot around the characters and the situations they land in.  I’ve found that when I think of the plot first and try to build the scenes and characters around that plot, it doesn’t come off as naturally.

Besides writing these books do you submit your writing to other sources as well – such as short stories or writing contests?
I have in the past but not really anymore.  They can be great venues, though.

You’ve done two series now one with Enescu Fleet and another with Warren Kingsley as your lead character. Are there more books in store with them?
I’m sticking with Fleet for right now.  I may do something with Kingsley again, but probably not a full novel.

Now that you have several books published, what have you found works best now in promoting them?
I think the best approach, whether you do your own promotion or get someone else to do it, is to have specific goals.  Not only does that help focus what you’re trying to accomplish, but you can evaluate beforehand what endeavors are the most worthwhile.  The scatter shot approach can work too—that’s usually what I do—but it’s easy to become disorganized, and you’re going to have to rely on luck a lot more.

What made you decide to republish your short mystery puzzle book? How has it sold in comparison to your original book, Dead Men Do Tell Tales?
Deadly Allusions is the e-version of Dead Men Do Tell Tales.  Dover Books changed the name when they bought the print rights.  Since we last spoke, I’ve had my cover artist, Katerina Vamvasaki, redesign the cover for Deadly Allusions so it matched the other MysteryCaper books.  (Also, it just looks really cool.)

As for sales, Dead Men is selling better than the e-version.  Part of that may be that Dover has great sales channels, and they’ve been around forever.  They know what they’re about and they make it easy for people to find their books.  Allusions started out as a series of iPhone apps and those also sold better than the e-book.

Like Dover, apps have a marketing mechanism built right in: the app store and web pages dedicated to apps.  Hopefully, I can work on getting the word out better on the e-book.  Dead Men/Allusions makes a great accompaniment to the Fleet novels because they all feature scholarly puzzles.  (That was my attempt at getting the word out.)

Do you have any writing advice or tips for other writers that you would like to pass along?
Just keep doing what you’re doing (unless what you’re doing is all wrong, then don’t do that.  I think WC Fields said something to that effect.  Or if he didn’t, he should have.)  Seriously, just make certain whatever you do, you love.  That’s really the only thing that matters.