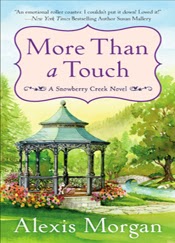 My Interview today is with Alexis Morgan who is the author of more than thirty books, novellas, and short stories that span a variety of genres. She has been nominated for numerous industry awards, including the RITA© from the Romance Writers of America, the top award in the romance genre.


When did you publish your first book?
I sold two books on one phone call in 1992. The first book was a short contemporary romance published in 1993, but the publisher went out of business shortly before the second book was due to be released. That one was eventually published by a different publisher in 1996.


What do you think you learned from writing your first novel that helped you in the second one?
The first book I actually completed has never sold, but I just started writing and let the story tell itself. From that I learned that even though I'll never be a detailed plotter, it does make it easier to keep the story on track if I have at least a destination in mind before I set out on the journey.


After your first novel was published, did you think you could make a career at it?
I hoped I could, but I got off to a slow start. I didn't have another new sale until 1999, which came out in 2000. I've had books out every year since then.

Your writing includes different facets of the romance genre. Do you prefer one genre to write in more than another?
All writers have favorite themes underlying the stories they tell. It's those themes that are the common thread that run through all of my books regardless of the world they take place in. I love the world building that goes into creating a fantasy world or a town in the late 1800s. I've also enjoyed telling stories set in the 1870s, but also in modern day Seattle. I have to admit that I've loved building Snowberry Creek, the fictional town in my new series, from the ground up.

How do you keep the writing fresh and contemporary after so many books?
I think trying different genres helps to stretch my "creative muscles," which definitely helps to keep my writing fresh. I loved the challenge of creating a fantasy world for the Warriors of the Mist and building a small town like Snowberry Creek. It keeps me looking forward to sitting down at the computer to see what comes next.


How long does it take for you to write a book now?
It usually takes me three to four months to write a book and polish it up to send off to my editor.  I average about 30 pages a week, but I have to build in extra time to do edits on books that are already in production and to do other things like promotion, etc.


How many rewrites do you do?
I always edit the previous day's work before I start writing new pages, so I do a lot as I do the first draft of the book. Then about 2/3 of the way through the book, I usually stop and go back to the beginning to do a fresh read to make sure I haven't dropped any threads along the way. After I do reach the end, I do at least one more read through and polish before I send it my editor. Once I have her feedback, I do the revisions she has suggested.


When you do research for your books do you ever actually visit the locations or is the research mostly internet or book researched?
It makes it easier to get the details right if I use locations that I'm familiar with for the settings in my books. I grew up in Missouri and have lived in the Pacific Northwest for a long time, so I've used those most often. I have used other areas that I've visited for the same reason. I have been to places that inspired settings in my books. For example, I visited one of the caves in Missouri. That gave me the idea for using one as the headquarters for my Paladins in that area.


Have you ever gone somewhere and thought this would be a great location to use as a backdrop to a story?
When I was starting to work on my Snowberry Creek series, my husband and I spent a day driving around in the area near Mount Rainier where I wanted to "park" my town. We took lots of pictures of the mountains, the foothills, and the surrounding landscape. It's a beautiful region just south and a bit east of the Seattle-Tacoma area.


Do you do the research or do you have an assistant?
I do my own research and use a mix of the internet and books. I tend to use the internet for quick answers (like when blown glass was developed), but books when I need more in depth information.


Do you think there will always be print books? Or do you think it will all go digital? How do you feel the digital market has changed the publishing industry for the better or worse?
I would hope that there will always be print books because I still love being surrounded by my favorites in my office. I do think that digital editions will continue to grow in number, and I love the convenience of my e-reader, especially when I travel. I think the digital market has opened up so many new venues for stories to be published, especially cross-genre stories that might have had a harder time finding a home with a more traditional publisher. 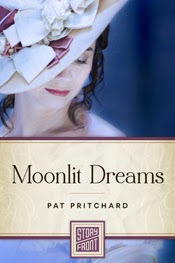 You’ve also written under another pen name. Why the need for a different identity?
I've written all of my historicals under my real name Pat Pritchard. When I decided to do a major shift in directions to write paranormal romances, it seemed a good idea to take a new pen name to keep the different genres separate.


How do you write? Did you do an outline first? Did you do individual character development before doing the full plot?
I almost always see the characters first and then the plot. I pick names, look for pictures to represent the characters, and then write a brief description of their emotional theme. After I've gotten to know the hero and heroine, I write a synopsis of the story, usually about eight double-spaced pages.


How much does social media play in your promotion of your books? What suggestions do you have for enhancing a writer’s social media platform?
I'm active on both Twitter and Facebook. I think it's important to be accessible to my fans, and I love the conversations we have on a variety of topics. Sometimes we talk about favorite sports teams, books, tv shows, and movies. On occasion, I ask my readers for their input on something I working on in a book, such as what kind of coffee would a man order (I drink tea) or a name for a character.


Does your editor or publisher ever suggest you slant your books a certain way?
I've had my editor ask me to strengthen certain aspects of the story. For example, in my Snowberry Creek books, she pointed out that the characters were saying things to Mooch the dog that maybe they should be saying to each other.


Since you've now proven yourself as a bankable writer, have any of your books been rejected by a publisher?
Yes, but not often. Rejection is part of the business. Sometimes it's a matter of them preferring one storyline over another. Or a couple of times, I've had them ask for a different story in a series than the one I was planning to do next.

What is some of the best writing advice that you’ve received or could give?
I think that learning to be disciplined and consistent about your writing is incredibly important. That's the only way the book ever gets written. And if you do sell to a publisher, you have to know how long it will take you to write the book so you can give your editor a realistic idea of when you can finish it.


Are there any other points about writing that you would like to add?
Writing is by necessity a pretty solitary occupation. However, I think one of the best things you can do for yourself is to surround yourself with people who will applaud your victories and offer tea and sympathy when things aren't going right.