Writing for the Latinx Market: An Interview with Jennifer Torres 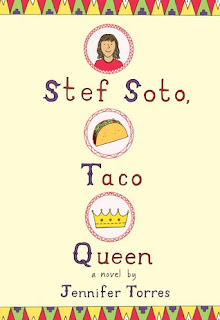 According to your bio, your first story was published in a newspaper when you were seventeen. It was a piece about making tamales with your family. Is that when you decided to become a writer?


I started loving stories and storytelling much earlier than that. I was a pretty shy kid. It was often really hard for me to find my words when I had to say them out loud. But writing, I discovered, offered a way to express what I was thinking and feeling. It was a way to speak up, to be brave, to be understood.

That said, I rarely encountered stories about kids like me, or families like mine, in the books I read as a child—so I didn’t ever imagine myself as an author. Writing that essay about making tamales with my family—and even more so, seeing it published—was the first time it occurred to me that stories like mine mattered too.

After being a newspaper reporter, what drew you to writing an MG book?
I loved being a newspaper reporter. It was an incredible privilege to be entrusted with the stories of everyday people who were striving and struggling, thriving and surviving at work, in schools, in neighborhoods. I started writing children’s fiction when I was still working as a reporter, and my books have all, in one way or another, been inspired by my years in journalism.

For example, my first book, a picture book called Finding the Music (Lee & Low), was inspired, in part, by an obituary I wrote about a farm worker who used to teach mariachi music to the children in his community. “He wanted to rest in peace,” his wife told me at the wake, “but with music.” I wanted to imagine the kind of life that would lead to such a beautiful and evocative remembrance.

Similarly, my first middle-grade novel, Stef Soto, Taco Queen, was partly inspired by the many first-generation children and families I had the honor of getting to know while I was an education reporter in Stockton, California. Good, sound journalism is true in the sense that it’s grounded in facts – things that really happened to real people. The stories I write now are fictional, but I hope they’re still “true” in a different sort of way. 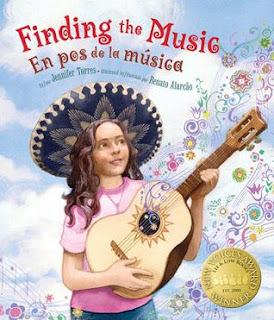 I think part of what makes middle-grade books so special is the way that, at their best, they explore those moments of discovery or uncertainty or friendship — universal moments that stretch across lines of race or ethnicity (or class, or gender, or faith, etc.) — that are a part of growing up.

How did you go about finding an agent and a publisher?
While working on my first picture book, I did lots of research to understand the process and business of publishing. I joined the Society of Children’s Book Writers and Illustrators (SCBWI), and read stacks and stacks of children’s books, looking not just at how they were crafted, but also at the publishers, agents, and editors who had worked on them. It helped me understand where my book might fit.

When I decided my manuscript was ready, I sent it directly to Lee & Low Books as an entry in the New Voices Award writing contest. It won! And Finding the Music was published a couple of years later.

As I was working on my middle-grade novel, I knew I needed to find an agent. So, again, I did a lot of research, reading tons of middle grade, in part, to understand which agents represented the kind of book I had written and wanted to continue writing.

Jennifer Laughran was one of those agents, and, coincidentally, she was teaching a webinar on middle-grade fiction that came with a written critique of the first 500 words of a manuscript-in-progress. For me, it was perfect timing and an amazing opportunity to learn and get feedback from someone whose insights I respected. I revised my manuscript based on Jennifer’s notes, submitted it, and am so thrilled to be working with her.


What does your editor remind you to do most often?
To write more. To elaborate, to explain, to fill in the background details…more. As I mentioned, I started my professional career as a journalist, and coming from that tradition, my writing tends to be very lean and spare. That can be a good thing in some ways—my plots tend to stay on track, and I’m rarely faced with chopping beloved scenes in the editing process. But, fiction allows for a kind of expansiveness that I am definitely still learning to take full advantage of. 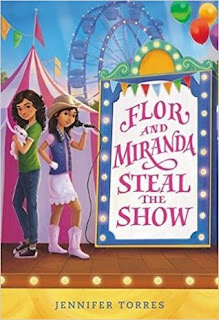 We have all experienced rejection. Give me an example of one you’ve had, and how you learned to write past it.
I think coming from newspapers trained me from very early on to understand writing as a process—and a collaborative one at that. I got used to pitching ideas (and having them shot down) and defending my writing choices, often unsuccessfully.

I LOVE working with editors. To me, the editing process is when a story begins to transform from something that exists only in my mind into an idea in the world. Anytime you send an idea into the world, you make yourself vulnerable to rejection. And it’s hard not to take rejection personally because writing is personal.

My new MG novel, The Fresh New Face of Griselda, started with rejection. I had expected Griselda to be my second novel, after Stef Soto, Taco Queen. In fact, I started drafting it even before Stef was released. After many rounds of revision—and facing a submission deadline—I turned it into my editor, hopeful because I had invested so much time and care into it, and eager because it’s a story very close to my heart. Aaaaand….she said it wasn’t there yet.

That was a blow. But I took her feedback and spent a couple of months revising the whole manuscript. I turned it back in feeling energized, knowing this second version was SO much better than the first.

At that point, I set the manuscript aside and decided to work on something completely different. I wrote a whole new novel and saw it published (Flor and Miranda Steal the Show) before taking another look at Griselda’s story. With fresh eyes—with space and perspective and a little bit more experience—I could see the manuscript’s problems more clearly and, just as importantly, I could see my way through to fixing them.

I couldn’t have done so without that gift of distance from my original vision, an important lesson for me. I’m so grateful that my editor saw what the story could be and didn’t settle for less.

Can you give me a short synopsis of your latest book, The Fresh New Face of Griselda?
After the family business fails, Griselda Zaragoza—along with her mom and big sister Maribel—has to move in with her nana while her dad leaves for Los Angeles to find work. Griselda has lost not just her home, but confidence in herself and her once unflappable parents. Her old life and all the beautiful things in it, like the garden she and her dad planted in the front yard and her collection of First Ladies of the United States teacups, feel just out of reach. 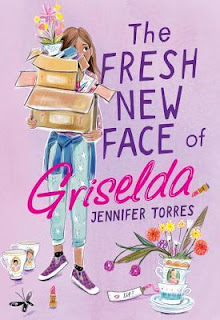 Then, tagging along with Maribel, who postponed college for a job selling
cosmetics, Griselda dreams up a plan to reclaim the life she thinks she lost: If she can sell enough tubes of glistening, glittery lip gloss, she’ll win a cash prize that just might help revive her dad’s business.

I am so excited for readers to meet Griselda!

That’s all for today’s interview. The story of Griselda comes out August 27. If you’d like to be one of the first to read this book, here’s a link to make this happen.
www.jenntorres.com
Twitter: @jennanntorres
Instagram: @jennanntorres