A Photo Opporturnity for a Book: Author Interview with Kate Larkinson 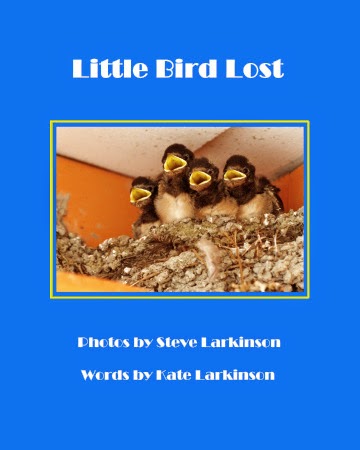 l love how your book started by chance with your husband’s photos of a swallow's nest. Who thought of the idea first to create a written story to go with the photos?
Thank you! We were both staggered by the way these tiny creatures took such great care of ALL their offspring, going to such great lengths to make sure the weakest also got fed. They were very amusing and full of character!

Did you collaborate on the writing? How many pictures did he take?
It was Steve's idea to create a children's story from the photos but the project was delegated entirely to me at that point! There were around 30 to 40 photos altogether taken very rapidly over a 5 to 10 minute timeframe.

How long did it take you to write the story?
It was a couple of years before I found the time to sift through the photos and select the best ones to tell the story, but once I got started it all fell into place really easily. I think I made just two small changes to the words; changing the opening numbers to numerals to make them easier for young children to read and shortening a couple of the lines to improve the rhythm.

Prior to writing this book, what other types of writing credits did you have?
This is my first published work but I’ve always enjoyed writing for leisure. As part of my librarianship training I studied children’s literature, and I read to my own children a lot as well as helping with literacy at their primary school.

How did you go about trying to find a publisher?
I used Bonusprint to get a copy of the book printed and sent it to a couple of agents that I'd selected from the Writers and Artists Year Book. They kindly returned it in the envelope I'd provided along with encouraging replies but were unable to take it on at the time. This was a slow process, so I then created a website to preview the book and sent emails with a link to it to a further 20 or so agents. Most of these replied but still none of them were able to take it on.

What made you finally decide to go the self-publishing route?
During this time, I attended a one-day course on self-publishing and briefly published the book using online print-on-demand service Lulu, but the cost didn't make it a viable option. By this time it was four years since I'd written the book, our eldest grandchild was 5 (the book is for ages 3-5) and tablets had enabled the publication of picture ebooks, so I decided to publish the book myself using KDP. I subsequently discovered Createspace and was then able to publish it also in paperback at a reasonable cost.

What do you think is the most common misconception about self-publishing?
I think that self-published books are often regarded as inferior to those published by a larger publisher. Sadly this is sometimes true if the book hasn't been produced with care and attention, but there is no reason why this has to be the case. In fact, an author who cares about their work will usually give it far more attention than someone less involved with it.

What has surprised or frustrated you the most in marketing your book?
I was quite surprised at the number of books being published now, and have felt a bit frustrated at times at how difficult it can be to get our book noticed. It’s difficult to know exactly what generates the sales but I do know that Goodreads Giveaways in particular have certainly generated a lot of interest in our book.

What do you know about writing/publishing now that you wished you had known sooner?
All the marketing that you can do before your book is actually published. My focus was on making our book available for our grandchildren before they grew out of it, so I wouldn’t actually have changed the way that I launched it. However, I have noticed that a lot of interest can be generated prior to publication.

What is the best advice you’ve been given about writing or that you’ve learned that you would like to pass along?
If you’ve got a book that wants to be written then get started on it! It takes a lot of effort and patience to get a book written, published and read, but if you believe in it then it's worth every bit.

Are there any other books in the works that you would like to tell my readers about?
I have got the makings of a follow-on called Little Bird Flies, aimed at giving young children confidence in new and potentially scary situations. My focus for now though is to help get Little Bird Lost found!

I hope you'll take a look at Kate's book and maybe even buy it. Here's some great links for more details.