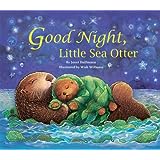 Today’s interview is with Janet Halfmann who has published more than thirty books. Her writing began with a home-study course in children's writing which soon became her dream. That love of writing took her into various directions from working at a national magazine called Country Kids, to creating coloring and activity books for Golden Books and selling articles to Ranger Rick and Jack and Jill magazines. From there she wrote a series of insect books for children. She now specializes in children’s picture books.

How did you come up with the idea of your current book?

I decided to write Fur and Feathers after I noticed on the publisher’s website that they were looking for a story on animal "wraps." That topic fascinated me, so I started researching and brainstorming possibilities, and Fur and Feathers was born!

I got the idea for Good Night, Little Sea Otter when I was writing a magazine article about two young scuba divers. In researching the many creatures the girls met in the underwater kelp forest off California’s coast, I especially fell in love with the sea otters. I was fascinated by how the mother sea otter wraps herself and her baby in kelp strands for the night so the two won't drift away. I knew I had found the perfect pair to star in a bedtime story! And with four kids and four grandkids, I didn't have to research bedtime stallers!

Could you give me a short outline on the story for my readers?
Fur and Feathers, which recently won Gold in the Moonbeam Children’s Book Awards, is a fun story of creativity, friendship, and animal coverings. When whipping winds whisk the clothes off Sophia's animal friends in a dream, she shares her clothes with them. But the animals can’t walk or fly in the kid clothes. So Sophia comes up with a creative plan. Using items from her grandma's huge sewing box, she creates new coats for the animals. To each coat, she adds her own special touch, such as a little red heart behind the polar bear’s ear.

The idea for the big sewing box came from the one I always kept handy for creating or fixing whatever while my four kids were growing up. As for the special touches, Sophia just seemed to start adding those on her own. In writing the story, I used each class of animals so the story would be not only fun, but as educational as possible. The book also has a “For Creative Minds” educational section on classification at the end.

Good Night, Little Sea Otter is a soothing and fun bedtime story featuring a baby sea otter who stalls going to sleep. He has to say “good night” to each and every one of his ocean friends. It seems like he'll never close his eyes! But he finally settles down to sleep cuddled in his mama’s loving arms and a cradle of kelp.

From the time you sent in the manuscripts for these two books, how long was it before you got any feedback?

With Fur and Feathers, I got feedback almost immediately because Sylvan Dell Publishing published another of my books, Little Skink’s Tail. The publisher asked me to add two more animals, including an insect. After that revision, it took about ten months before the publisher bought the manuscript.

I submitted the otter manuscript to Star Bright Books in October 2007, and they bought it in April 2008. I originally wrote the otter story in 2001 and over the years submitted it to several publishers, fine-tuning it several times in the process.

What was the total time frame from the point of submission of the original manuscripts to the actual printing of the books?
Fur and Feathers took a little over two years from submission to finished book. Good Night, Little Sea Otter took about three years.

I see that you work with several different publishers. Why not with just one source?
Several of the publishers I publish with have specialties. Sylvan Dell Publishing wants fiction with a math or science tie, Soundprints is a work-for-hire publisher, Lee & Low Books publishes only books on minorities, etc. Even when a publisher buys one of your manuscripts, it doesn't mean they will buy the next one you send to them, so then you look for another publisher for that manuscript. Sylvan Dell Publishing encourages its writers to send their manuscripts out to other publishers as well as them.

What type of publicity does your publisher do to promote your book?
The publishers send review copies to review journals, bloggers, etc. (publishers more and more prefer to send e-books or pdfs rather than actual books). The publishers post the reviews in various places: their own websites and blogs, Facebook, etc. The publishers also promote the books at trade shows and through their school, library, bookstore, and other contacts.

Sylvan Dell Publishing also created a trailer for Fur and Feathers, which can be viewed on the publisher’s page for the book: http://www.sylvandellpublishing.com/bookpage.php?id=FurFeathers. The publisher also created a 57-page free online Teaching Activities Guide to go with Fur and Feathers, plus several other free resources, including reading and math quizzes, alignment to state and national standards, English and Spanish audio, etc. Sylvan Dell also has provided thousands of schools and libraries free access for a year to all 55 of their e-books through educational resource grants.

What do you do to promote your book?
I organized a virtual book tour for Fur and Feathers that included the illustrator. The tour featured reviews, interviews, guest posts, and giveaways. For both books, I contacted several bloggers and asked if they would review my work. I share all reviews and other publicity for my books with my publishers and on my Facebook and Twitter pages. I let bookstores, nature centers, libraries, etc. in my local area know about my new books and offer to do events. I do interactive story times at libraries, bookstores, book festivals, nature centers, etc. Before any event, I contact the media for publicity and submit the info to various media calendars.

What do you know now about getting published that you wished you had known earlier in your writing career?
I wish I would have known that each word of a manuscript has to sing before it’s good enough.

What advice would you give someone who wants to write children’s books?
Read, read, read, the kind of books you want to write.
Write, write, write, every day if possible.
Revise, revise, revise, until every word sings.
When you feel every word in your manuscript sings research markets to see who publishes your kind of project and send it off. Then forget about it and start something new.

Also, write about what you enjoy. Join the Society of Children’s Book Writers and Illustrators (SCBWI) and get involved in their state or regional group. You can learn so much by going to writing conferences, workshops, or chatting with other writers in person or in online writing groups.

Janet Halfmann now writes in a home office in South Milwaukee, WI, where she lives with her husband Tom, an artist and retired teacher. When she’s not writing, she enjoys spending time with her family; working in the garden; exploring nature; visiting new places, especially wildlife areas and living-history museums; and watching movies.

If you have small children to whom you read bedtime stories, I would wholeheartedly recommend Good Night, Little Sea Otter. I think it could have the same long life as the perennial favorite, Good Night Moon. It is extremely charming!

If you would like to know more about the author, you can check out her website at: http://www.janethalfmann.com
Star Bright Books Good Night, Little Sea Otter page: http://www.starbrightbooks.org/details.php?id=300
Posted by Christine L.Henderson at 9:52 AM