When Hopes and Dreams Become Reality 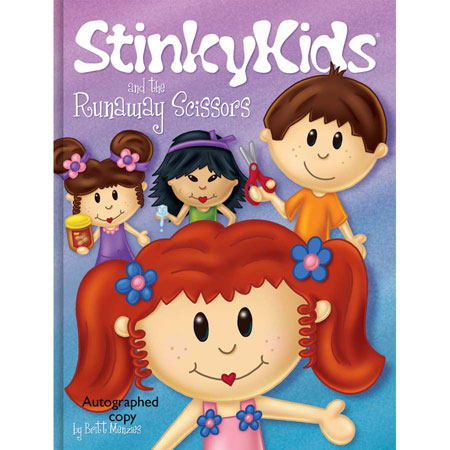 Back in 2006, Britt Menzies had done two small paintings of her children. This led her to getting commissions from friends to do paintings of their children as well. Then Britt decided to do a group of six paintings that all had unique personalities. When she took her paintings to a local children’s store, the manager loved the whimsical looks of the kids and wanted to know if Britt would be willing to sell the rights to her art for a line of T-shirts. Though the idea seemed appealing at first, instead of selling her idea to someone else, she decided to grow the business herself not just as T-shirts but as a brand.

When she and her husband began to brainstorm for a name for the cute tykes, they came up with StinkyKids. This was in honor of their own kids who they had affectionately called, “little stinkers.” The name came from the children, though being sweet they could still get into mischief. They were little stinkers, but still good children who tried to do the right thing.

At this point, Menzies was a stay at home mom who had previously worked as an accountant. When I asked her about her marketing background, she said, “I didn’t have any past small business experience. I never considered myself a risk taker. Yet there was something in my gut that told me I could do this.

With the emotional support of her family she started the business with the family’s personal savings. There wasn’t any formal business plan. In asking her how she got started, she said, “I have always believed in networking and having a list of what all the people I know do for a living, as you never know when you might need their help. This is how I started with my screen printer for the T-shirts.” She also made sure that all the people in her network knew about the clothing line she had developed which helped in her initial sales.

Once she had a collection of T-shirts for children and their moms, she brought them to local stores and sold them at craft shows. What gave her a boost was having a website done by a web designer. Here she told the story of her “Stinky Kids” and how the T-shirts were unique. They were not just shirts but the individual characters on them. Each shirt came with the story of the kid on them and told how they related to the other kids in the group and in their town of Morningside. Their stories told of mischief but also of being a “leader of good.”

In asking Menzies to describe what this means she said, “We teach our children to make the right decisions and not be the follower of bad behavior. Instead they should be leaders of good behavior.” This is what her StinkyKids emulate in their stories.

Doing what is right isn’t just for the StinkyKids characters; it is also part of the mission for the business. The company donates 10% of their profits towards the fight against cancer as well as partnering with different charities and fundraisers to make a difference in the community. Menzies also does one to one counseling with others who want to start a business.

When asking her what advice she could give other new entrepreneurs she said, “You have to remember that each step is a building block. It takes time to grow. Don’t look at your competitors. Listen to your clients and what they want. Do what works for you. Don’t try to expand too quickly.”

Menzies also spoke about the importance of self-promotion, “It’s important to believe in yourself. Have a passion for what you do. I wear one of my T-shirts each day and let people know that this is my clothing line. You can’t be afraid of telling people what you do. You have to eat, sleep and breathe the business.”

Telling people about what she does is part of the story of how she grew the business. She wore one of her T-shirts into Nordstrom’s where a sales clerk asked about it. After telling her about it, the clerk brought her over to her department manager who really liked the idea. That led to a contact with the store’s children’s apparel buyer which resulted in a sale to the store and eventually all the other stores.

Since then the StinkyKids T-shirts have branched out into a line of StinkyKids dolls whose design is now licensed by Madame Alexander Dolls. Story books have also been published as part of a series.

In asking Menzies what she might have done different in growing the business she said, “I wouldn’t have given away so many T-shirts as a way to grow the business. That doesn’t do it. Being part of group of gifts in a celebrity swag bag doesn’t bring in a lot of new business. A celebrity wearing your shirt is not going to expand your business rapidly.” She also stated the importance of the age old concept of keeping it simple. When she tried to do too much all at once it cost her more money than she needed to spend. The extra expense didn’t grow the business as much as her self-promotion and networking with others had done.

When asked what her future plans were for the StinkyKids she said, “I hope I can expand into more books about the town and a plush toy pets to go along with the dolls. We also hope to expand into other activity books for children.”
Menzies hopes that one day it could also evolve into an animated series. That could happen. Just a few short years ago this business was just a sideline of doing commissioned art for friends. Now it is a national brand.

If you would like to learn more about StinkyKids and their line of products, click here
Posted by Christine L.Henderson at 8:00 AM