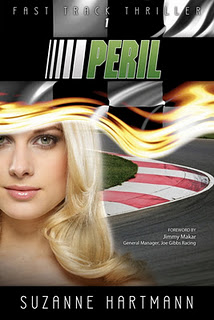 Suzanne Hartmann loves books and they have been a part of her life from working at a library and a bookstore, and then as a publisher’s representative. Currently she is a contributing editor with Port Yonder Press. She also operates the Write This Way Critique Service. Today we will be discussing her fiction writing.
How long have you been writing?
I have a degree in Composition and Linguistics, but most of my training was for non-fiction. After graduation, I worked for eight years as a paralegal writing legal documents. I didn’t start writing fiction until my children were little. That’s when I sold four short stories to Millikin for a reading workbook. The idea of writing a novel didn’t cross my mind until 2006.
What motivated you to write that novel?
The Fast Track Thrillers began as stories I created to entertain myself during my children’s music lessons and sports practices. It didn’t enter my mind to write a book until one day when I was thinking about the latest story while taking a walk.
A thought popped into my head: “Why don’t you write them into a novel.” For a while I considered whether I was having a premature mid-life crisis, but finally decided that it was truly a nudge from God
That book was just released in November and is entitled, PERIL: A Fast Track Thriller. What makes this book special?
I love books full of unexpected twists and turns I don’t expect. That’s the type of book I would like to read, so that’s the kind of book I write. The book is a Christian suspense novel with diverse main characters. Here is a short blurb about it:
Lady Anne, an agent with enhanced strength, lives a life cloaked with secrets she must guard at all costs. Her troubles begin when she escorts King Ahmad—a Muslim who recently converted to Christianity—during his state visit to the U.S. When she uses her extraordinary abilities to rescue the King from terrorist bombs at the White House and later  at a NASCAR track, she is catapulted into the public eye and becomes a terrorist target.
Are you a long time NASCAR fan?
I wasn’t a NASCAR fan when I first started writing the Fast Track Novels. My husband liked to watch the races, but I would take a nap. That changed when I started doing research, but it took a hot pit pass at a Nationwide race (when I started volunteering with Midwest Raceway Ministries) to really pique my interest. Getting up close to the cars and the action was pretty cool.
What type of research did you do for this book?
Since I wasn’t a NASCAR fan when I started writing PERIL, I needed to do quite a bit of research. I checked out stacks of books from the library. Since I hadn’t mentioned my writing project to my family, they naturally wondered why I had checked them out. I ‘fessed up and shared my dream of writing a novel, and since then, they have all been very supportive.
Have you drawn from any of your own experiences in writing this story?
They say to write what you know, so I pulled from my personal experience for a few sections in the novel. Like Joanne, I was in a very serious car accident a long time ago. I had her scream until her throat was so raw that she couldn’t make a sound because that happened to me. The tidbit about her aunt feeling the need to pray for her sister’s family happened the night of my accident.
My dad suffered through a serious illness. Rather than do research about an illness I knew nothing about, I stuck with something familiar to me and gave one of the minor characters the same life-threatening disease.
What do you hope readers will take away from your novel
First of all, I hope they enjoy the story and consider it a good read. Beyond that, there are some important themes in the book. I hope readers take away the fact that we need to follow God’s promptings even when they don’t make sense. There is also an undercurrent about honesty, and how important it is in relationships.
What is your best writing advice?
My husband gave me this advice when I struggled to finish the first draft of PERIL and it kept me from spinning my wheels and getting stuck: Just finish the book.
It’s also important to be willing to learn. Read about the craft of writing. Attend writing conferences. Be open to errors other writers point out and to their suggestions.
Be persistent. Keep writing, keep revising, and keep querying. Eventually your writing will improve enough to catch the eye of an agent and/or editor.
Do you have another book in the process?
I am writing the sequel to PERIL, titled CONSPIRACY, due out in the summer or fall of 2012. This novel picks up where PERIL leaves off. It tells how Joanne’s life falls apart around her as she deals with a family tragedy and unfounded accusations against her and her boss, George, regarding Lady Anne’s assignments. When the attempt to discredit George fails, someone frames him for selling secrets to foreign governments. Joanne determines to do whatever it takes to find the truth even as Stuart helps her pick up the pieces of her personal life.
Do you plan on this being a series?
I already have a third book in the Fast Track Thriller series which is called REVENGE. It is scheduled for release in 2013. In this story, the man behind the conspiracy in book two isn’t content to sit in jail. He vows revenge. Joanne must fend off his attempts to expose her deepest secrets while testing a possible cure for the life-threatening illnesses stealing the lives of those with enhanced abilities. When Stuart’s life is threatened during a race, will she trade her secrets in order to save him? 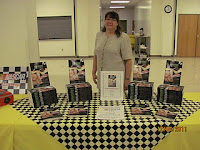 That’s all for today’s interview. If you would like to learn more about Suzanne’s writing here’s some helpful links…
http://fasttrackthrillers.blogspot.com, Twitter - @SuzInIL,
http://Suzanne-hartmann2.blogspot.com,
and http://facebook.com/suzannehartmann
If you’d like to buy her books you can do so at OakTara Publishing (http://oaktara.com))
Amazon or at her website: Fast Track Thrillers (http://fasttrackthrillers.blogspot.com)
Lastly, here’s a link to her book trailer (http://www.youtube.com/watch?v=a5gxeOhAgto)
Posted by Christine L.Henderson at 7:00 AM