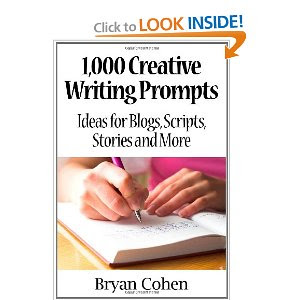 You’re part of the new breed of authors that doesn’t want to wait for publishers to anoint you to write. What made you decide that self-publishing was the route for you?
The funny thing about my trip into self-publishing was that it was partially a lack of self-confidence initially. Obviously, you need a certain amount of self-confidence to write a book in the first place, but my thinking at the time was, "Ahhh! I don't have any money. Maybe I can use some of my blog posts as a book?" First, I just tried to sell them on my website as a PDF. Later, I learned about Amazon's Kindle Direct Publishing and off I went. It wasn't until Christmas 2010 that I really saw just how powerful self-publishing could be.
You’ve now written nine books that are available on Amazon. How has that worked out for you?
When I first started self-publishing, I was strictly using Amazon's site instructions and I didn't have a ton of help figuring it out. I stumbled through it and made some mistakes, but when you can't find someone to help you; I thoroughly recommend crashing through the front door and hoping for the best. Later on, I received some help from members of the Kindle Boards website and eventually from mega-indie superstars J.A. Konrath and John Locke. 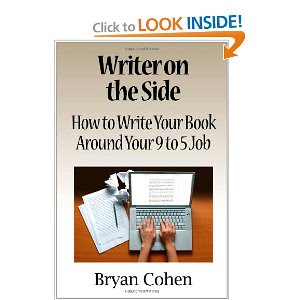 What surprised or frustrated you most about the indie-publishing aspect?
I was surprised by how easy the process was after I'd been through it a few times. I'm happy to say I've had few frustrations with indie-publishing, other than the frustrations any author might have, like releasing a book without anybody buying it :).

Those nine books all have print dates from this year. Did you just write non-stop in 2010? Why such a rush to publish?
A few of the books, like 1,000 Creative Writing Prompts and Sharpening the Pencil were created using material I already had lying around from my website. Covenant Coffee and Chekhov Kegstand were plays I'd written years ago. Once I realized that self-publishing could work, I threw a bunch of the wood I had on the fire. I figured the more I had out there, the better chances I had of scoring a hit! Out of the nine books I have up online, I wrote about four of them in 2011, which is still a decent haul for one year.

Your five books on writing seem to be intertwined and work into each other. Why five books? Why not only one or two? What makes your books unique on writing as compared to the thousands of others out there?
My first book, my baby, 1,000 Creative Writing Prompts is pretty unique in that it's incredibly thoughtful. I'm very proud of all the work I put into that over the course of a couple of years through posts on my blog. The others were kind of an off-shoot to see what area of the industry might need another boost. Writer on the Side was meant to see if those with 9 to 5 jobs might need help getting their writing done and was half-based on a series I did on my site.
What about the other three books? 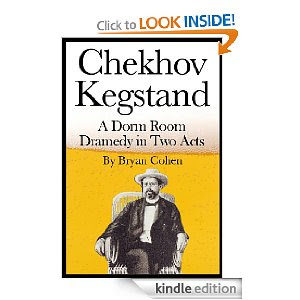 Sharpening the Pencil was a collection of essays for writers to bolster up various parts of their lives. 500 Writing Prompts for Kids was my attempt to be scholastic and see if elementary school teachers might want to test out some of my prompts. The Writing Sampler is a tiny sample of each of the other books. All of them have been successful in their own way, but the reason I released five of them was to experiment what the market was like.

I can see that your books are largely written from your personal experience of writing. Such as your play, Chekhov Kegstand, which was a final paper for a class. How many times have you re-written it and produced it in different adaptations.
Chekhov Kegstand was originally Mangum 310, based on my junior year experience in college. Magnum is a dorm on campus at the University of North Carolina at Chapel Hill. I first wrote the play at the end of that year and re-wrote it a couple of times before producing it during my senior year. I directed the play, which was a surreal experience indeed. How do you cast your life? I let the play sit on the shelf for a number of years before producing it early last year. I rewrote it, renamed it and sat on the sidelines while a friend of mine directed it. It was scary letting someone else take over, but then again, that's what most writers do.
Which do you feel more comfortable doing – writing, directing or acting? What gives you the most satisfaction?
I love all three: writing, directing and acting and I actually might be the most comfortable at directing, though I've done it the least. I find it the most satisfying because you have so much control over the final product. I've written a couple of other plays including a superhero spoof with my friend Kit FitzSimons called Kerpow! and an ensemble play called Something from Nothing, based on the improv comedy scene in Chicago in the 1980s.

When you see or hear something that seems a potential for a story idea do you immediately write it down? Or do you do a daily journal of sorts?
This has changed a lot actually over the years. I used to get so many ideas that I could barely elaborate on any of them. My writer's block was more like a log jam! Eventually, I was able to focus long enough to write one out in full and it felt so good, I was fortunately able to settle down and write a few more. I keep a little red notebook and I'm constantly jotting down ideas in there. I've also been keeping a blog, Writing for 365 Days in a Row that notes a few of my ideas as well.

That's it for today's interview. Come back on Thursday for Part 2 of this interview. In the meantime if you would like to learn more about his writing you can by using the links here: