Interview with Will Allison, author of best selling books, "Long Drive Home" and "What You Have Left" 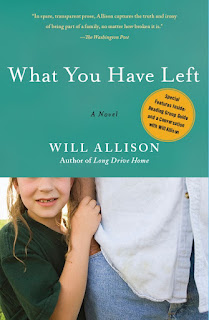 On Tuesday we chatted about being an editor with Will Allison. Today we will be  following up with him as being an author.  He has now published two books with both with high acclaim and becoming New York Times bestsellers.
After spending much time on the editing side, you wrote your first novel. Or was it just the first one published?
What You Have Left was the first book I ever finished, though I started and gave up on a couple of others.
How did you handle the change of hats from being the editor to being the one being edited? How good are you at taking criticism?
My friend Max Steele once told me, "I have never seen a piece of fiction that couldn't be improved by editing." I feel the same way, as both an editor and writer. I'm lucky to be married to a brilliant editor who gives all of my fiction a good, hard scrub.
How long did you work on the book before you sent it out to publishers? Did you go through the rounds of finding a publisher like the usual first time author, or did you have an inside track to agents and editors because of your background?
The book took me seven or so years to write. Along the way, I ended up publishing all of the chapters as stories in literary magazines. By the time the book was done, I was fortunate enough to be working with a terrific agent, Julie Barer, who sent it around to publishers.
Both your books are relatively short by most fiction standards today, with the first at 240 pages and the second coming in at 224 pages. Did your editors suggest you lengthen it at all? Or was the book judiciously cut?
Neither book was cut. They're just short.
When your first saw your book in a book store what was the feeling like for you?
It felt great!
How do you handle seeing a review of your books that may be less than stellar?
I try not to take reviews personally. My job is to write the book; once it's out in the world, the reviewers get to do their job. Mostly I'm just grateful for the attention that comes with any review.
Both your books deal with broken relationships between a father and a daughter where they become estranged. How is your relationship with your daughter?
Sadly, my nine-year-old daughter, Hazel, and I haven't spoken since she learned to talk . . . Just kidding. Like a lot of parents, I can't help imagining worst-case parenting scenarios. The difference for me is, they get turned into stories.
Your books also deal with ethical questions about life, death, suicide and how one’s ill guided thinking can have a deep ripple effect. How do you leave these kinds of stories on the computer and not let them affect your own life and family?
They do affect my life and family, in that I hope I'm able to learn from my characters' mistakes. 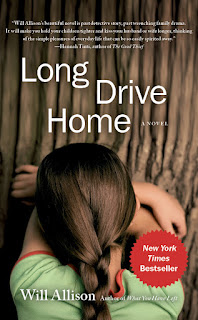 It was four years between your debut novel and your second book. Did you have the second book in the works at the time of the first publishing? Or did it come later?
I started Long Drive Home about six months after What You Have Left was published. In the interim, I started and abandoned another novel.
Why did you give up on these other novels that were in the works?
I dropped them because I lost interest in them, and I felt that I couldn't expect readers to be interested in a story I wasn't excited about writing. But I suppose if I saw one of them in a newly exciting light, sure, I might pick it up again.
Was getting your book published what you expected it would be?
Publishing a book was a wonderful experience. It's been almost five years since What You Have Left first came out, and the glow still hasn't worn off. Publishing Long Drive Home was like bonus glow.
Obviously, you don't have to publish a book to be a writer; you just have to write. But in publishing a book, I gained a much larger audience--actual readers! That's the payoff.
Was it easier to get the second book published? Do you have any other books in the process now?
I had a two-book deal with Free Press, so the question is whether it will be easier to get a third novel published. But that's what I'm aiming for. I've recently started work on a book about a band of outlaw children who take up residence in the industrial marsh wasteland of the New Jersey Meadowlands.
That’s all for the interview today. If you would like to know more about Will and perhaps hire him as an editor, here’s the way to do that. Here’s his Web page and his Facebook info.
Posted by Christine L.Henderson at 7:00 AM

Email ThisBlogThis!Share to TwitterShare to FacebookShare to Pinterest
Labels: Long Drive Home, New York Times Best Seller, What You Have Left, Will Allison