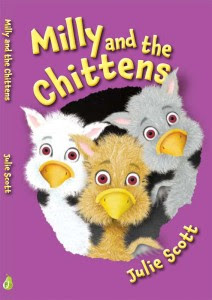 The beauty of the internet is that I can do interviews around the world. I've chatted with authors in the United States, Canada and Great Britain. Today we will discussing writing with an author in New Zealand, which is a lovely country that I have had the pleasure of visiting and hope to again someday. So let's get on to the interview...And at the end there is an opportunity to win a free book!
How did you come up with the idea of your current book?
My current book, Milly and the Chittens is a chapter book aimed at 7-10 year olds. It is about a young girl, whose room is so messy that it becomes a hatching-ground for mysterious garbage-eating creatures. Milly then has to come up with ways to persuade her Mum to let her keep them.
Not surprisingly, the idea for this book came from my daughter's messy room when she was younger. I told her there might be creatures living in there and she wanted to know what sort of creatures. Of course, in the story everything is exaggerated. The room got messier and messier; the creatures got more fantastic.
How much did the story change if any in the process?
When I first wrote it, it was quite short, only a few thousand words and I submitted it to Penguin NZ for a series they were producing of very simple chapter books for beginning readers. The publisher liked it, but thought that the language was a bit complex for their target audience. I wanted to keep the style of writing so I developed the story into something longer and a bit more complicated.
I see the book is in both eBook and standard print format but it is soon coming out in audio as well. Did you do the audio yourself?
The audio book is still in development, but we're planning to get an actor to do the voice - something I'm very happy about

BONUS GIVEAWAY! Enter to win another children's book called Cows Can't Quack here
or enter for a chance to win The Pea in Peanut Butter by clicking here