Interview with Anthony Franze, author of The Last Justice, a Political Thriller 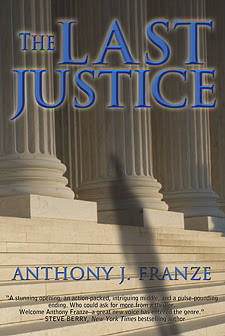 You’re a big time D.C. lawyer working on Supreme Court cases and a law professor and have now written a thriller about the Supreme Court. Was this writing a bit of a catharsis for you in working through the system? Working on The Last Justice was more a labor of love than a catharsis.  My main goal was to craft a fast-paced thriller, but I also hoped to take readers into the insular worlds of some of our country’s great institutions.
Are your characters bits and pieces of people you’ve worked with?
None resemble anyone I’ve ever met.  And given that virtually every character in the book is corrupt or, at minimum, deeply flawed, that’s probably a good thing.  Lawyers often get a bad rap, but the attorneys I know are dedicated, hard-working, and moral professionals.  In other words, they would make terribly boring characters in a legal thriller.
How do you make the break from writing legal briefs to fiction? The switch isn’t as difficult as you might think.  Whether it is legal writing or fiction, my goal as a writer is the same:  compose clear, brisk prose, and paint a picture in the reader’s mind using as few words as possible.  Beyond that, it helps that I have a clear dividing line when I shift from legal to fiction writing:  legal writing during the work day (though it does often bleed into night); fiction after 11pm.  Conveniently, I’ve found my fiction prose flows best late at night.
What made you decide to write a novel?
I’ve always used fiction as a creative outlet.  Once I developed the idea for the opening scene in The Last Justice, the novel just took off from there.
How have your peers reacted to your writing about the justice system?
My colleagues have been incredibly supportive, and I’ve also received several nice notes and kind words from lawyers, law professors, judges, and others in the legal community.  Despite the book’s dark premise -- the assassination of Supreme Court justices -- members of the legal community, like most people, love a good read.  Some of the most meaningful feedback has come from those who appreciated the accuracy of the law, procedures, and history I weaved into the story.
As you’ve written articles for legal publications, did any of these past editors help you in your quest for a publisher? How long did it take before you found a publisher that wanted to take on your book?
As you mention, I’ve published a number of academic articles, but none of my past editors had backgrounds in fiction, so I did not seek out their assistance for my novel.  I sent some manuscripts directly to a few publishers and also followed a familiar path:  query letters to agents, rejection letters from agents (lots), and finally having an agent take an interest in the book.  It is all a haze now, but the entire process took years.
Did you hire an editor before you sent out your manuscript or did you just self-edit?
Before submitting the book I followed the advice I used to give my students when I taught legal writing (borrowed from Making Your Case, a must-read book on writing and persuasion for lawyers):  “Sit down and write.  Then revise. Then revise again.  Finally, revise.”
What has frustrated you the most in the publishing process? My biggest frustration with the publishing process is the long period of time it takes to get into print.
What have you found the most rewarding – outside of seeing your book in print?
The most rewarding part, so far, has been hearing from readers about the book, and the warm reception and support I’ve received from other thriller writers.
What surprised you the most about the publishing process?
The most surprising thing, for me, has been the author’s role in promotion.  For instance, when I was writing The Last Justice, I had no idea I’d even need an author website, much less all of the promotional events required of new authors.
With your work, how do you find time to promote your book?
Finding time to promote the book given my busy law practice continues to be a struggle, but I’m muddling through.  I keep telling myself that I managed to write the book while maintaining my practice, so I have to apply the same dedication and stamina to ensuring The Last Justice gets read.
I understand you are a member of the International Thriller Writers. What have you learned from this organization in either helping you with your writing or marketing?
Joining International Thriller Writers was one of the best decisions I’ve made as a new author.  From its Mentor Program where I’ve received advice from veteran thriller writers, to its Debut Authors Program where I’ve had the support of writers experiencing the same new adventure, to the organization’s leaders who have provided platforms to promote my book, ITW has been amazing.  I can’t list everything I’ve learned from ITW since I learn something new daily.  It is a great organization.
I understand you are also working on a non-fiction book on the Supreme Court. What exactly will that cover? Could you give me a short synopsis?
I am collaborating with one of my colleagues in Arnold & Porter’s Appellate and Supreme Court group as well as a statistician and a journalist to write what we hope will be the go-to resource on the high court.  The book will take both an empirical and personal look at all of the key “players” at the high court from the litigants, to the Solicitor General, to the press, to the Justices themselves.


That's all for today's interview. If you'd like to learn more about the author or buy his books, here's a link to do just that.
Posted by Christine L.Henderson at 11:02 AM