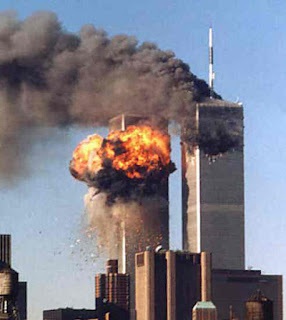 It has now been 11 years since the horrific attacks on our country on September 11, 2011. There are some in the media and political circles who think we should downplay those events as past history and not connect it to an attack of radical Islamic terrorism -- to merely terrorism to be more politically correct and less offensive. Yet would that not diminish the horrific act to just a random act of terrorism with no ties to those in the past by similar groups and those still being carried out?

...On the morning of September 2001, Al Qaeda terrorists boarded and hijacked four passenger planes. This was to carry out coordinated suicide attacks against the World Trade Center in New York City and the Pentagon in Washington, D.C. Everyone on board the hijacked planes died as well as nearly 3,000 people on the ground. The fourth plane didn't hit its target as it crashed into a Pennsylvania field, killing all on board, after passengers and crew attempted to wrest control from the hijackers. Below is a chronology of the events of 9/11 as they unfolded. The times listed are Eastern Daylight Time (EDT).

• 7:59 am – American Airlines Flight 11, a Boeing 767 with 92 people aboard, takes off from Boston's Logan International Airport en route to Los Angeles.

• 8:19 am – Flight attendants aboard Flight 11 alert ground personnel that the plane has been hijacked; American Airlines notifies the FBI.

• 8:20 am – American Airlines Flight 77 takes off from Dulles International Airport outside of Washington, D.C. The Boeing 757 is headed to Los Angeles with 64 people aboard.

• 8:24 am – Hijacker Mohammed Atta makes the first of two accidental transmissions from Flight 11 to ground control (apparently in an attempt to communicate with the plane's cabin).

• 8:40 am – The Federal Aviation Administration (FAA) alerts North American Aerospace Defense Command (NORAD)'s Northeast Air Defense Sector (NEADS) about the suspected hijacking of Flight 11. In response, NEADS scrambles two fighter planes located at Cape Cod's Otis Air National Guard Base to locate and tail Flight 11; they are not yet in the air when Flight 11 crashes into the North Tower.

• 8:41 am – United Airlines Flight 93, a Boeing 757 with 44 people aboard, takes off from Newark International Airport en route to San Francisco. It had been scheduled to depart at 8:00 am, around the time of the other hijacked flights.

• 8:46 am – Mohammed Atta and the other hijackers aboard American Airlines Flight 11 crash the plane into floors 93-99 of the North Tower of the World Trade Center, killing everyone on board and hundreds inside the building.

• 8:47 am – Within seconds, NYPD and FDNY forces dispatch units to the World Trade Center, while Port Authority Police Department officers on site begin immediate evacuation of the North Tower.

• 8:50 am – White House Chief of Staff Andrew Card alerts President George W. Bush that a plane has hit the World Trade Center; the president is visiting an elementary school in Sarasota, Florida at the time.

• 9:02 am – After initially instructing tenants of the WTC's South Tower to remain in the building, Port Authority officials broadcast orders to evacuate both towers via the public address system; an estimated 10,000 to 14,000 people are already in the process of evacuating.

• 9:03 am – Hijackers crash United Airlines Flight 175 into floors 75-85 of the WTC's South Tower, killing everyone on board and hundreds inside the building

• 9:08 am – The FAA bans all takeoffs of flights going to New York City or through the airspace around the city.

• 9:21 am – The Port Authority closes all bridges and tunnels in the New York City area.

• 9:24 am – The FAA notified NEADS of the suspected hijacking of Flight 77 after some passengers and crew aboard are able to alert family members on the ground.

• 9:31 am – Speaking from Florida, President Bush calls the events in New York City an "apparent terrorist attack on our country."

• 9:37 am – Hijackers aboard Flight 77 crash the plane into the western façade of the Pentagon in Washington, D.C., killing 59 aboard the plane and 125 military and civilian personnel inside the building.

• 9:42 am – For the first time in history, the FAA grounds all flights over or bound for the continental United States. Some 3,300 commercial flights and 1,200 private planes are guided to airports in Canada and the United States over the next two-and-a-half hours.

• 9:45 am – Amid escalating rumors of other attacks, the White House and U.S. Capitol building are evacuated (along with numerous other high-profile buildings, landmarks and public spaces).

• 9:59 am – The South Tower of the World Trade Center collapses.

• 10:07 am – After passengers and crew members aboard the hijacked Flight 93 contact friends and family and learn about the attacks in New York and Washington, they mount an attempt to retake the plane. In response, hijackers deliberately crash the plane into a field in Somerset County, Pennsylvania, killing all 40 passengers and crew aboard.

• 11:00 am – Mayor Rudolph Giuliani calls for the evacuation of Lower Manhattan south of Canal Street, including more than 1 million residents, workers and tourists, as efforts continue throughout the afternoon to search for survivors at the WTC site.

• 1:00 pm – From a U.S. Air Force base in Louisiana, President Bush announces that U.S. military forces are on high alert worldwide.

• 5:20 pm – The 47-story Seven World Trade Center collapses after burning for hours; the building had been evacuated in the morning, and there are no casualties, though the collapse forces rescue workers to flee for their lives.

• 6:58 pm – President Bush returns to the White House after stops at military bases in Louisiana and Nebraska.

• 8:30 pm – President Bush addresses the nation, calling the attacks "evil, despicable acts of terror" and declaring that America, its friends and allies would "stand together to win the war against terrorism."   Source: History.com
Posted by Christine L.Henderson at 8:00 AM

Email ThisBlogThis!Share to TwitterShare to FacebookShare to Pinterest
Labels: 9/11 timeline