On Cupcakes, Murder and the PTA, author interview with Wendy Dager 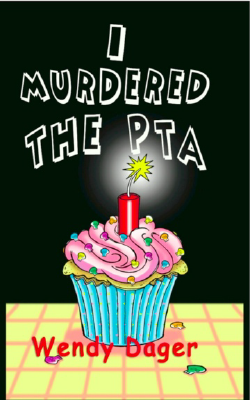 You’ve now written your second installment in what you call the Daphne Lee-Lee “Misadventures.” What drew you to writing this story?
For the first book, I MURDERED THE PTA, my motivation was seven years of being on an elementary school PTA board; sitting there, listening to the chatter and arguments and debates about book fairs and cookie-dough fundraisers and jog-a-thons, and thinking “WHY AM I HERE?” Then, after writing the book and finally getting it published—a decade after I wrote the first draft—I learned there were plenty of others who felt the same way. It doesn’t matter what you look like—whether you’re a rock-and-roll mom or not—a lot of us feel like the outsider.

Is the storyline drawn from any part of your own life, family or friendships?
I MURDERED THE SPELLING BEE, the second in the series, isn’t based on anything that happened in real life, other than that my own daughter, now grown, won a couple of school spelling bees. I also like the idea of intangible book titles that don’t make sense until you read the book.

What’s funny about the first book is that I was told some people in my community were buying it to see if they were in it! So, yeah, it’s kind of based on my experiences living in suburbia, but there’s definitely no one in it modeled on an actual living—or dead—person. However, I freely admit that my friend Chillpaw (who, in a twist of fate, became my cover artist) and I made up the term “Cupcakes” to describe all those women who baked so many of them.

This was before cupcakes were so popular—with all those specialty bakeries, TV shows and cookbooks, and Martha Stewart’s jail term and what the media dubbed “Camp Cupcake.” I try to look at the long road to publication as a good thing (hah, Martha!) because my cupcake-themed book cover was so "in."

Writing is far from something new to you. You’ve also written an opinion column? How long have you done that?
I’ve been writing opinion for about 25 years—the last 14 as a “stringer” for the Ventura County Star newspaper. When my kids were small, all I had time to write and sell were button slogans, greeting card copy and the occasional opinion essay. Back then it was easier to break into the newspaper biz.

What topics did you cover in it? What sort of feedback do you get?
I’ve written for other newspaper sections such as news, lifestyles and niche publications, which are all formulaic, but in my column I get to write freely about family and community issues. I do get fan letters, which I appreciate—but I’ve also gotten some pretty gnarly hate mail. Recently, someone hated one of my columns so much that she tweeted about it—four times. I guess the 140-character limit was too limiting. One of my former editors once said, “It comes with the territory,” meaning: “Don’t be such a wuss, Wendy. You signed up for this job, so you’ve got to take the criticism along with the accolades.” She was right.

Now that you are a published novelist, you are called upon to do speaking engagements. Do you do any extra promotion to make sure you’re not speaking to an almost empty room?

I send press releases and use social media to promote my engagements, but there’s no real way of knowing how many people will show up. Sometimes, people intend to go to that conference, book signing or lecture, but life and its distractions get in the way. I always hope the venue will adequately promote an event, but writers can’t count on it. Unless you’re a big-shot author, attendance is mostly hit-or-miss.

How did you learn what to say and what to cover in your talks?
I try to tailor my talks to the audience. For instance, since so many people know me (in Ventura County, CA) from my column, I warm up the crowd by telling them that if they don’t like something I wrote, then they’ll have to first talk to my six-foot-four husband, who’s sitting in the back of the room. Humor always works. Most always, that is. There always seems to be that one person who sits there, stone-faced, arms folded, as if daring you to make them laugh.

I love question-and-answer sessions, because I enjoy speaking off the cuff and sharing anecdotes. The only problem is that I can get somewhat tangential. I tend to circle back to a topic pretty quickly, though.

Writing humor is supposedly one of the hardest forms of writing to do successfully. Do your readers get your type of humor or do they question you about what you meant?
I am lucky to have had people of all ages and walks of life come up to me and say that I MURDERED THE PTA was the first book they laughed all the way through. I wrote it to amuse myself and was glad that other people got the joke(s).

I saw a friend when I was out shopping soon after I MURDERED THE PTA came out, and she told me she was in the process of reading it. “I’m so worried about you,” she said. “Why?” I asked. She looked at me sadly and said: “Don’t you like living here?” “WHAT?” I had to remind her that the book was fiction. Besides, my character, Daphne Lee-Lee doesn’t dislike living in her little suburbia. She’s just… different from everyone else. 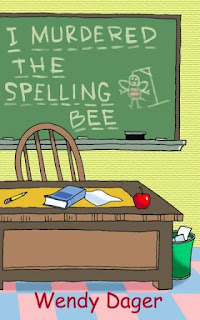 How long did it take you to write this book?
It only took about a month to write the first draft. I know that sounds ridiculously brief, but it was just so much fun to write that I couldn’t stop.

Did you self-edit or hire someone else?
As far as editing, being a professional freelancer, I’m pretty good at doing it myself. I had to tweak the book many times, especially ten years later, when it was finally sold, and a lot of the pop culture references were severely out of date. For instance, a reference I’d initially made to the TV show “Friends” was changed to “Two and a Half Men.” Then the Charlie Sheen continuing series of debacles happened almost immediately after publication. Eh, well. Can’t stop time. Or wacky celebrities.

Once you wrote the book how did you go about looking for a publisher and or agent?
All my first agent did was send mass e-mailings to her authors saying how bad the writing business was. I don’t know if she ever actually submitted the book to a publisher. I then got myself a big-time New York literary agency, where my second agent burnt out, left the agency and passed me along to her colleague. That third agent couldn’t sell my book after two years of representation—even after it was a finalist in a major contest—but managed to sell a porn star’s autobiography within a week. This same agent asked me if I could write a nonfiction version of I MURDERED THE PTA. Uh… OK… how was I supposed to do that when I kill eighteen people in the book?

What has frustrated you the most in the publishing process?
Oh I’ve been so very frustrated, mostly by the inability to break into a traditional publishing house. My biggest peeve is that the giant publishing houses are selling out by giving huge book deals to celebrities, sports figures, and politicians instead of real working writers. Of course, there are the flukes: Twilight, 50 Shades of Grey, etc. It’s the writing industry version of winning the lottery.

There I go again, being tangential. So, yeah, I MURDERED THE PTA was a top five finalist in Court TV’s Search for the Next Great Crime Writer, and I still couldn’t get a traditional publisher to bite. I finally ended up with a contract from Zumaya Publications, a small, indie publisher that uses print-on-demand technology to publish its books.

What have you found the most rewarding – outside of seeing your book in print?
I love it when a reader tells me how entertained she was by my books. I know my novels are not great works of literary genius—I’m just not built to write that way. But they’re funny and they’re fun and if I can make someone laugh, that’s a pretty cool feeling.

What surprised you the most about the publishing process?
My editor and I copyedited the books online. No galleys mailed back-and-forth. No hassle. No paper. We edited in real time on our computer screens—me in California and she in Texas—writing comments in the chat box and changing passages and correcting the copy. That was a great experience.

What has been the most productive promotion that you’ve had with marketing your book?
There’s a lovely woman in my town that hosts charitable fundraisers at her gorgeous home. It may sound like an odd way to sell books, but I was the “entertainment” portion of a charitable event, giving my talk in a fabulous back yard setting, taking questions from the audience, then signing books and talking individually to some super nice people in my community. Donations went to a local hospice, and each person received a signed copy of my book. It was a very exciting event with lots of positive energy.

Writing seminars are always telling us about building a marketing platform. What have you learned from using social media sites like Facebook, LinkedIn, Twitter and others?
Some social media sites work better than others. Facebook has been great for me. I have an author page, a page for each novel, and my personal page. I also have a website and a blog. I occasionally tweet, but I wonder if anyone is reading them, or if they’re just flowing out unseen into the ether. LinkedIn, I don’t get at all, even though I have a page.

My friend, the writer Jim R. Lane, once quoted the writer Dennis Lynds to me: “Never say ‘crimson edifice’ when ‘red barn’ will do.” I will never forget that beautiful quote, because I prefer to write simply and not use those $30 words. Certainly, this doesn’t apply to everyone. (I have a kid who’s an English major and she’s into literary stuff that I’ll never understand in a million years.)

As for my own advice, it’s a little less poetic. I always tell writers to treat their writing as a business. If you want to be considered a professional, set your ego aside (but not completely aside; we all need some ego), and be a thoughtful, organized businessperson.

So if you are looking for a light-hearted read to ease you through the day, one of these books could do the trick. If you'd like to learn more, here's the link to her website  .
Posted by Christine L.Henderson at 8:00 AM