On Scripting and Writing - An interview with Hilary Weisman Graham 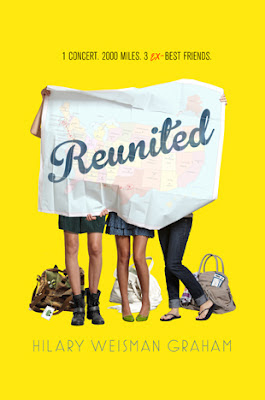 My interview today is with Hilary Weisman Graham who wears dual writing hats  as  a screenwriter and novelist.  But she doesn't live in the glitz and glamor of L.A. or NYC. Instead she lives in rural New Hampshire roughly thirty minutes away from the nearest grocery store. Maybe being away from the flash gives her more clarity, let's find out.

The title of your book, Reunited and the blurb about it caught my attention. What drew you to writing this story?


The idea for REUNITED actually came from my editor at Simon & Schuster who had a two-sentence concept about ex-best friends getting together to see a band they once loved.

Is the storyline drawn from any part of your own life or friendships? Your website promotes a band. What is your relationship to them?
Since I’d experienced a friendship break-up of my own freshman year of high school, I really connected with those feelings, even though my story is very different than Alice, Summer, and Tiernan’s.  For most 14-year-old girls, their best friends are the most meaningful relationship they’ve had at that point in their lives, apart from their family, so I thought the idea of ex-best friends reuniting at the end of high school, when they’re older and wiser, would make for an interesting story.


Plus, I’ve had to good fortune of having been on many road trips in my life—backpacking through Portugal and Spain with my sister and a friend during college, wandering around the Irish countryside with four of my best girlfriends in a very small rental car, and driving from Boston to Juarez, Mexico with a group of friends while shooting a documentary. Though thankfully, I’ve never been stuck in a van with any of my ex-best friends.


Your website promotes a band. What is your relationship to them?
As far as the band Level3 goes, the secret is that the book actually came before the band.  REUNITED tells the story of Alice, Summer, and Tiernan—three ex-best friends who drive 2,000 miles cross-country to see the one-night-only reunion show of the band (Level3) they loved as little girls. And each time I found myself writing the lyrics to a Level3 song—an event that happened frequently, since lyrical excerpts open each chapter—I became aware of the fact that I was also composing the melodies to these songs in my head. 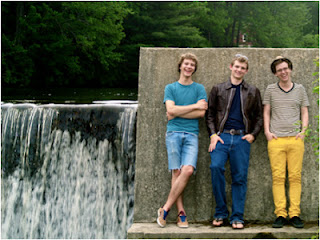 So even though I don’t have a musical bone in my body, I thought it would be fun to bring my fictional band to life. Luckily, I have some very talented musician friends who helped me do this.  And winning the 2011 SCBWI Book Launch Award didn’t hurt, since the cash prize enabled me to get a bit creative with REUNITED’s marketing.


Today, http://www.level3theband.com is a place where fans can read blog posts by the band members, download two free Level3 songs, peruse photos, watch a Level3 music video and a behind-the-scenes “pop-up” documentary (coming soon), and follow Level3 on Facebook and Twitter. And Level3 is even going on tour this summer at libraries from Boston to Austin!

Your bio says that you are an award-winning filmmaker and screenwriter. Tell me about that side of writing.
As far as my filmmaking career, by the time I was 28, I’d written/produced/and directed two feature films  (Life’s Too Good and I Love My Movie) which have garnered numerous awards and played in art-houses and film festivals around the world, though they never received widespread theatrical distribution. But in 1999, despite colorful language and brief nudity, I Love My Movie aired on public television (Go PBS!).
I’d say that most of my work is comedy-based, though I’m currently working on some more dramatic stuff.

I started off my career as a filmmaker and TV producer, but writing was always a big part of my job. Even in my free time, I’d find myself participating in poetry slams or composing humorous essays to share with my friends.  But for many years, I considered myself a “filmmaker who writes” as opposed to a writer.

You were a contestant on a reality show entitled, On the Lot: The Search for America’s Next Great Director. Tell me about that experience.
Then, in the summer of 2007, I was selected to be a contestant -- which, if you never caught it, was like American Idol for filmmakers, and aired on Fox for only one season.  The goal of the show was to find “America’s next great director,” and I’d been handpicked out of a pool of 12,000 applicants.

It was during that summer in Los Angeles, in the midst of an intense filmmaking competition, that it suddenly became very clear to me that it was the writing part of filmmaking that I’d always most enjoyed (and was best at) only I’d never realized it before. So, I guess you could say that my big “ah-ha” moment happened on live TV.  After that, I made it my goal to become a working screenwriter and novelist—and I’m happy to report that with the help of my amazing manager and agent, my dream has now come true!  And the best part is, I’m able to do it from rural New Hampshire.

What surprised you the most about the experience? How much of the “reality” is actually scripted?
The summer I spent in Los Angeles was simultaneously one of the most incredible and difficult times of my life.  In the end, I spent two months On the Lot, the ninth person eliminated from the competition and the last female director standing. Getting kicked off the show was bittersweet. I was sad to have not gone further, and at the same time, ready to be home.

The most surprising (and wonderful part) about the experience was how generous all of the filmmakers were with each other, despite the fact that we were competing against each other.  It was like living in a creative think tank!


As far as the reality of reality television, on my show, there wasn’t a lot of overt scripting, but producers definitely had a hand in shaping the narratives.


What scriptwriters or authors have given you the most inspiration? Is there anyone who you would like to emulate?
There are so many writers I draw inspiration from, even though my work may be nothing like theirs.  People like Aaron Sorkin, Hal Ashby, John Hughes, Tina Fey, Jennifer Egan, Jonathan Franzen, Anne Lamott, David Sedaris, John Greene, Jay Asher, Dave Eggers.

How long did it take you to write this book? How many rewrites did you do prior to sending it out to publishers?
REUNITED took me about 10 months to write, including revisions.  But the entire process—from getting the deal to seeing it in bookstores—took almost four years!

What has frustrated you/surprised you the most in the publishing process?
The wait!  That was really a killer for an impatient gal like me. ;)


What have you found the most rewarding – outside of seeing your book in print?
It’s been really heartening to get good feedback from readers, especially teenage girls.

Writing seminars are always telling us about building a marketing platform. What have you learned from using social media sites like Facebook, LinkedIn, Twitter and others?
As a first-time author, perhaps the most important lesson I’ve learned from my fellow novelists is that in today’s world, writing is only half the job.  Between publishers tightening their budgets and readers who log onto Google searching for “bonus content” the second they finish a book, writers of all genres—and YA in particular—are embracing the internet not just as a promotional tool, but as a way to supplement the reading experience.

So, once I’d turned in my chapters, instead of kicking back and celebrating, I launched into my next job—building Reunited’s online universe. After I’d redesigned my website and set up the obligatory Twitter account, Facebook page, YouTube channel, and blog (sigh) it was time for the fun stuff, like shooting Reunited’s book trailer, or going into the studio to produce two songs for the book’s fictional band, Level3.  And everyone knows you can’t have a rock band without a website.  See www.Level3theband.com .

Sometimes, all the additional work it takes to do this “other stuff” feels draining, but most of the time, I really do enjoy this part of it.  The actual writing may have ended months ago, but thanks to Reunited’s online presence, the story is still very much alive.

What is the best advice you’ve received on writing?


Probably the best piece of writing advice I’ve gotten came from Robert McKee, the author of “Story,” a popular (almost cultish) book on screenwriting.  And I have the audiobook, so it feels like McKee’s talking directly to me (which, if you’ve ever heard McKee speak, comes off more like a reprimand, but that’s part of his charm).

Anyway, Robert McKee insists that you not write dialogue or scenes prior to having worked out the structure of your story first, because if you do, you’re in danger of falling in love with your own words and keeping a wonderful bit of dialogue that ultimately, doesn’t belong in your story.  I think I fell victim to this a lot when I was first starting out as a writer.  But sadly, we all must learn to kill our darlings.  There’s really no other way.

That's is for today's interview. Hilary is currently working on a new YA novel as well as a script for The Disney Channel.

If you would like to learn more about her, here's the links to do just that.