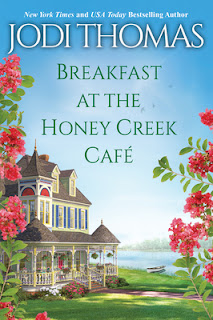 My interview today is with an author who has won four RITA awards and two Reader's Choice awards. Jodi writes historical and contemporary romance with plots set in her home state of Texas. Since that's my home state, and I've been an RWA member, it gives me a special pleasure to share her thoughts with you!
You’ve now written seven series. What made you decide to write that first novel?
I started writing to make money so I could send my sons to college. I worked two jobs throughout and I wanted to make it a little easier for them.

When my son was little he used to say, “When I grow up and have an office I’ll have your books on my bookcase. When people ask me why, I’ll say, “Freshman year, sophomore year, junior year, senior year.”

When he made it to college one of his advisers had a row of my books on her shelf. My son asked her ‘Why’ and she said that I was her favorite author. My son answered, “Mine too.

I love that story! How did you go about finding an agent / publisher?
I entered contests and sent out about 100 queries. I found my first agent through a friend but she would not send anything because she said it was not good enough.

I met an editor in a 10 minute interview at RWA. I had left the first agent so I sold it alone. When I found another agent she sold four more books for me in 15 months. I was ready. Among her pile of not good enough was a RITA winner, my first best seller, and one book I should have left under the bed. 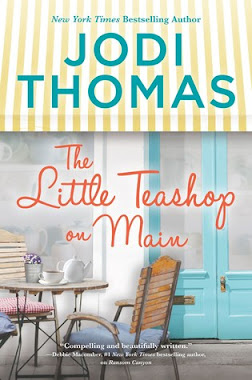 Learning my people. I spend sometimes months on the first three or four chapters. Once I find my people and know them it is a race to the end. I want to see what happens to the people I love.

What does your editor remind you to do most often?
Do not hurry the end.

What I remind myself : Write deeper!

What’s the best encouragement you’ve had in your writing?
When I wrote my first romance book and had no idea if it was any good. My mother and her friend traded romances every Sunday at church. So I gave my manuscript to Mom. She loved it. Said it had too much sex so I could leave that out in the next few books.

Then she gave it to Pearl after Sunday School. That night, Pearl did not show up for Training Union. Mom went by her house thinking something was wrong. Pearl was reading.

She said, “Tell that daughter of yours that I got more excited in her waterfall scene than I ever got with either one of my husbands.”

That's a hoot. I can see why it's so memorable to you. Now to another subject all writers have to deal with -- rejection by agents and publishers. How have you
learned to write past it?
On book 5 my editor told me I had peaked and I probably would not sell any more. That was 46 books and four RITAs ago.
That's one way to do it - prove them wrong. What has surprised you the most in writing/publishing?
I think it is how close I feel to my readers. When I meet them I always want to hug them because I know they are the reason I am writing.
What is the best writing advice you’ve received or could give?
Do not talk your story, write it. 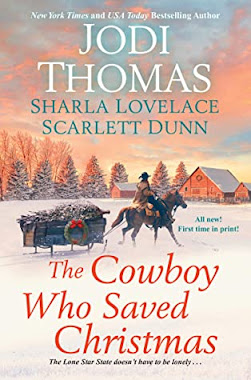 What's the next book coming out? Can you give me a brief synopsis?
I've got two books coming out that are both three stories in one book with two other authors. The first is called A Texas Kind of Christmas and my story is called "One Night at the St. Nicholas."

The story takes place in the historic St.Nicholas hotel in Dallas, Texas. It's about Texas heiress Jacqueline Hartman who spends Christmas Eve sharing a hideout with an accused bank robber. After a night in Nathaniel Ward’s arms, Jacqueline is certain she has met her match after all. But will his heartfelt promise of love lead to his demise at the hands of the law?

The publish date for that book is September 29

The next trio of stories is titled, The Cowboy Who Saved Christmas and is set to release October 27. My story is called "Father Goose" which is about Trapper Morgan who accepts a job hauling five little rich girls to Dallas, and all he cares about is the money. He doesn’t expect they’ll awaken his spirit—or that their intriguing nursemaid, Carolina, will awaken his heart. And when danger strikes as Christmas Eve nears, he definitely doesn’t expect Carolina and the girls to risk their lives—for him.
Sounds like great reads in front of a fireplace snuggled up in a blanket. If you'd like to learn more about Jodi's books, here are the links to get you started.
Amazon page: https://amzn.to/2PiuY6G
Her Website: http://www.jodithomas.com/
Goodreads page: https://bit.ly/2BWyH6T
Posted by Christine L.Henderson at 8:00 AM