Holding on to your Dream, an Interview with author Mark Roman 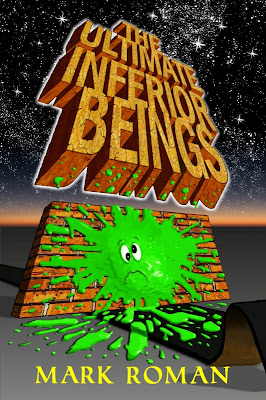 I have been doing author interviews on my blog for the past few years and I've always learned something from my fellow authors. This interview is no different. It remains us all that we need to keep writing! Read on for your own inspiration.

Most everyone thinks they can write a novel. What brought you from the world of science to writing fiction? How did you come up with the idea of your current book?
The book was conceived with a good friend when we were both at university, many years ago. We began knocking it out on an old manual typewriter (in the days before word processors) with the underlying plan of spoofing every clunky sci-fi cliché that had ever bugged us. Like: aliens who speak perfect English, or silly character names. But the story and characters quickly took over. And so did I, as my friend lost interest.

Could you give me a short synopsis of the story for my readers? What makes these beings the ultimate inferior beings?
The story is about a bungled space mission involving an ill-chosen crew and a ship’s computer that thinks it’s a comedian. A stowaway and a saboteur add to their troubles. On their journey they encounter slimy green blob aliens who speak perfect English (I know what you’re thinking, but stay with the story and all will be revealed).

Among the aliens are a religious group who believe that, somewhere Out There, exist a species of inept beings that are really, really bad at everything they do. They call them The Ultimate Inferior Beings (or The Dogs), and a prophecy predicts that a fatal act of incompetence by The Dogs will bring about the End of the Universe. One alien becomes convinced that Humans are this bungling species (not such a completely unreasonable assumption). He believes Humans will destroy the Universe unless he can destroy them first. And, in the end, the prophecy does come true – but you’ll need to read the book to find out how.

You write under a pen name – how did you choose it?
The pen name is a mixture of mine and my friend’s first names, but I’m not saying which is which.

Outside of your technical writing, what other fiction writing have you done?
TUIB is the first piece of fiction I’ve tried to get published. And it’s been a long and twisty journey, spanning three decades, and involving many obstacles and setbacks.

How did you go about finding a publisher? Did you pitch any agents?
I sent the first version out to agents and publishers in the UK over 30 years ago. Nothing. Ten years later, I rewrote it and tried again. This time I got lucky. A literary agent in London loved it and tried to place it. After six months and six publishers he reluctantly gave up. So the thing sat in the trunk for another 20 years until something inspired me to dig it out and rewrite it again. More agents and publishers. More nothing.

But you apparently didn’t give up. What happened next?
I put it up on Authonomy, which is run by Harper Collins, and is a great community of unpublished writers, many of whom give very helpful feedback on your work. (I hope I gave some useful feedback in return). This helped me make significant improvements to TUIB. Not that the publishers and agents noticed!

How did you hear about your current publisher? How long was it before you got any feedback?
My current publisher, Cogwheel Press, is a start-up and put out a call for submissions on several websites, including Authonomy. This happens occasionally, although some “publishers” who advertise their wares are dodgier than others and should be given a wide berth. I sent Cogwheel my first five chapters.
Happily, the editor has a most discerning 9 year old son – a child of great perspicacity – who plucked my book out of the slush pile. A request for the full manuscript came within a week with a contract a week later. Mine was their first book, and there have been 3 others since.

How do you write? Did you do an outline first? Did you do individual character development before doing the full plot?
I’m embarrassed to admit my writing is a totally unplanned, uncoordinated, random process. I admire writers who plot things out in detail, work out their characters’ development, etc. Me, I just write random pieces – ideas, snatches of conversation, bits of chapters – until there are enough random elements in the mix.

It then becomes a vast, complex, problem-solving exercise to fit everything together and shape it into some sort of plot. This is not the right way to do it. No self-respecting proper writer would ever use this technique. But for me, as a hobbyist, I think it’s OK.

What type of publicity do you expect your publisher to do in promoting your book? What plans do you have to promote your book?


As my publisher is a small press I realize there is a limit to the amount of promotion they can provide. Serious promotion costs big money and, sadly, small presses do not do have those funds. They invest their time and money in selecting, and then publishing, books they think have merit.

After that, it is largely left in the hands of the author to push their own work. If you can handle that sort of thing, that’s great and you’ll go far, but if you can’t, then your book won’t get noticed. Many writers are shy and self-effacing creatures, so shouting the wonders of their book from the rooftops doesn’t come naturally and, in fact, just feels slightly tacky and wrong. (I may be in the minority on this point!)

What do you know now about writing that you wished you had known sooner? I have been told, more than once, that adverbs are evil and must be eradicated. Hence I’ve been on many an adverb-hunt through my book to (mercilessly) shoot the buggers, although some may have (slyly) escaped the cull. Now I never (knowingly) use them.

Is this a standalone book or are you planning a sequel or prequel for any of your characters?
At the moment it is standalone. But, who knows, I may one day return to the crackpot world of TUIB.

What is the best advice you’ve been given about writing or that you’ve learned that you would like to pass along?
I’ve learned never to trust positive comments about your work. If people tell you your work is brilliant, hilarious, clever – don’t believe them! There’s a possibility they may genuinely think this, but equally there’s the chance that they’re just being polite (especially your mum) and holding something back. It’s difficult to be sure which (except in the case of your mum).

The only comments you can guarantee are genuine are the negative ones (except when they’re deliberately spiteful or malicious, for whatever reason). Criticism will upset you, of course. And in some cases, it may just be one reader’s opinion. But think the comments over. The reader may have a point or two that will help you plug a minor/major weakness in your story, or style, and make your book “even more perfect” (as a friend of mine used to say).

Thank you for that fun interview. I wholeheartedly agree with you on the folks who give only positive comments. The different critique groups I’ve been in over the years have always told me how wonderful my writing is but in many cases it is then rejected or ignored when it comes to the editors and publishers. Still I keep pushing on, and rewriting and hoping that the next editor/publisher will fall in love with my work.