Going Over the Hurdles to Publishing: Author Interview with Michael Stafford 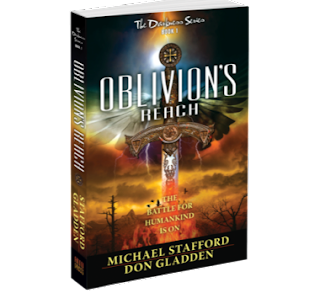 What made you decide to write your novel about a battle of epic proportions between good and evil?
In 2017 I went to a class reunion at my university and connected with Don Gladden.  We had played football together and stayed in touch after that meeting. Don called me one day and asked if I would be interested in working with him on a book he had self-published called Jones’ Corner.

I took over the re-writing of the book and did 6 drafts.  For Don’s original characters of Jones, Abby, Ellie, Sonta, Koal, and others, I fleshed out their characters, added battles, locations, more characters, and events.  That is what became the book, Oblivion’s Reach.

How long did it take you to write your first book?
My first novel was Between the Walls of Time, which is literary fiction about a man who starts a major third party in America, called The Front. It took me four years to write.

What made you choose the indie-publishing route?
We had no agent and 38 rejections from Christian Literary Agencies. Everyone from Donald Maass to WordWise declined to read it or offer representation. With no other real opportunities for a book we really had begun to like, I told Don about The Shack and how they had sold 800K copies, or more, from their garage.

We had access to Alto Pass Publishing, an IBPA company located near us, so we went that route. Before we finished that process, everything changed. Along came a good friend that was a part of my support network who had a client that had been associated with the Left Behind series. She loved the book and referred us to KPA (Koechel Peterson) in Minneapolis.

My son Logan and I were asked up to see them. We went. These two men are legends in Christian publishing.  They are primarily printers and interior formatters. They have worked with Max Lucado, Dr. Billy and Ruth Graham, Rabbi Jonathan Kahn, Tim LaHaye, Joyce Myers, and many more. They asked me if I would consider them for representation. The world turned that day when they told me of the projects they had done with Tyndale, Bethany House, and Kensington. Now we are close to signing a publishing contract with a major house.

What was the hardest part of publishing for you?
Everything is difficult and uncertain. My other book, which has gained favor and will have its own publisher soon enough was rejected by 236 literary agencies. It’s all way too hard, which is why so many good books are self-published and largely ignored. Self-published books have a much harder time getting reviewed, or not at all. Who has the budget of a Kensington or Hachette? Not most writers.

What is the hardest part of writing for you?
It took me four years of concentrated effort and study to learn sentence development, structure, sequencing, acts, and more. I learned about how to develop conflict and tension. I enrolled in MBA 101 for writers, studied The Breakout Novel by Donald Maass, who definitely was uninterested in my efforts, and Robert McKee, author of Story. I spent, and still spend, extensive time on my outlines. If you can’t outline it you can’t expect much, in my opinion.

What’s the best encouragement you’ve had in your writing?
That would be getting 5-star reviews from national reviewing agencies and people I did not know. Lots of reviews. We are after 2,000 reviews on Goodreads and have sent out over two hundred reviewing copies, given away 5 free copies and gotten 1274 shelvings, if I am interpreting the numbers correctly.

Now we are repeating the process. People all over the country are trying to buy our book. We have not been able to get the major churches onboard but maybe our publisher will do that. The Christian Ministries are certainly desirable, and my hope is some of them will hear about the book.

What do you hope your readers will take away from reading your books?
They tell me they love the story of a man who loses his faith, and his wife, and fights to get it back. They tell me the angels are among us and, make no mistake, these angels are warriors fighting a powerful enemy. The power of prayer can’t be missed. Those are the three major themes of Oblivion’s Reach.

We have all experienced rejection. How have you learned to write past it?
As I said before, I had 236 and 38, respectively. I kept going and look what happened.

What has surprised you the most in writing/publishing?
How difficult it is to break in, all factors considered, if you do not fit a certain profile.

What frustrated you the most?
Getting all those rejections. Then one day an agent told me that 130+ literary agencies had rejected Harry Potter. Then I knew it is happening to everyone, not just me. It is difficult to break in and easier to publish a known name. In my opinion, you have to get a break, somewhere, like I did by getting referred. Agents aren’t going to read your book. Every form rejection letter makes a point of telling you they are overwhelmed. I believe that.

What do you know now about writing you wished you had known sooner?
I did not realize how big having "a platform" was to the industry of agents. I also did not realize that before anyone sends out a query, the book needs to be absolutely ready -- not 90%, not 75%. Two agents went out of their way to tell me what a beautiful story and style I had but my book wasn’t ready.  I took the message to heart and started working. 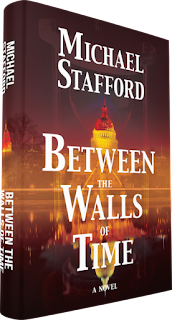 What is the best writing advice you’ve received or could give to others?
Find someone who has published at a major and is willing to be your mentor, to critique your writing, and listen to what they have to say. No matter how hard it is, find someone, unless of course, you have exactly the correct demographics then maybe my experience will be irrelevant.

Are there any other points about writing you would like to add?
Work every day. Treat it like a business for the day will come when you will have to do exactly that.

When is the next book coming out?
Our publisher will decide that. In the next two years more than likely

Can you give me a short synopsis of that book?
Oblivion’s Storm expands the conflict between Heaven and Hell. There is no going back, God has been quite specific about that.

That's all for today's interview. If you would like to learn more about Michael's writing and buy his books, here are some links to get you started.