Don't Give Up! Write the Book: An Interview with Debut Author Aliza Fogelson 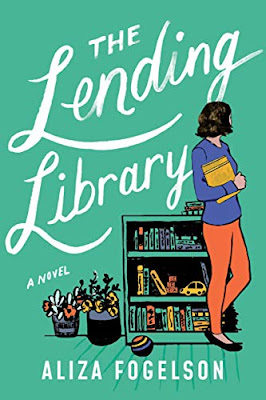 What made you decide to write a novel?
I’ve loved writing since I was a child. Somewhere in my parents’ house is a notebook with a long, meandering tale of a princess and her horse. She meets a prince and sees a lot of dewy sunrises and not much else happens. After college, I spent a year in Paris and wrote my first (unpublished) novel after being inspired to explore a favorite poet’s life in a fictional way.

But you didn’t stop with that book. Tell me about the next book.
Almost ten years later, Dodie, the protagonist of The Lending Library, appeared in my head as a character. I knew only that she wanted to open a lending library in her home, that she adored books and food and people, and that she was a quirky, generally upbeat heroine. Writing a novel about her was a way to get to spend more time with her and to find out what her journey would be.

How many rewrites did you do on that book?
It took a lot of revisions—at least five that I can remember—before it became The Lending Library in its current form, and my official, published debut novel.

How did you come to publish with Amazon’s publishing arm, Lake Union?
Before becoming an independent book editor and writer, I worked at HarperCollins and Penguin Random House, so I always envisioned publishing by the traditional route. But having been in the industry for more than fifteen years, I also knew the path to publication can be challenging and unpredictable.

I reached out to a few agents and was incredibly lucky that Meg Ruley, from the Jane Rotrosen Agency, fell in love with The Lending Library. She submitted the book to more than twenty editors at traditional publishing houses.

Enter Danielle Marshall, who came to Lake Union/Amazon Publishing after years in traditional publishing, including bookstores. She saw the potential in the book, and I loved her enthusiasm and vision for it. She also assured me that there would be a paperback, which made me happy as someone who treasures the experience of reading on paper.

How do you write? Are you a pantser or a plotter?
I write according to pleasure. For me, the greatest joy in the writing process is discovery. In a funny way, I believe characters become real enough that their story takes on a life of its own. I had glimpses of things that would happen in the book near the beginning, middle, and end. When I sat down to write, I would focus on whichever moment in the story interested me. The characters would often surprise me with what they wanted to do. I tried to be open to that serendipity, even though I knew it would mean a lot of rewriting and fixing to make everything coherent and fill in the gaps.

I sometimes wished I could outline in advance and write in sequence since that might have been a lot more efficient, but ultimately I hoped allowing the characters to lead the story would allow me to write in a way that felt organic. I did do a sort of retroactive outline during one of the later revisions, when I needed to trim the book and wanted to make sure to maintain its integrity when determining what would stay and go.

What do you know now about writing/publishing now you wished you had known sooner?
It’s okay to take your time. There are many incredible writers out there who are much quicker, more prolific, and require much less editing and revision. Writing The Lending Library took several years, and revising it took several more.

I was fortunate to have partners—first, my agent, then my editor and publishing team—who were patient with me when I needed time. Over those months and years, I had important experiences that informed the book, and—I hope—helped me take it to deeper places emotionally than I would have been able to before.

Is this a stand-alone book or are you planning a sequel or prequel for any of your characters?
I would never say never to a sequel, prequel, or spin-off for another character, but I wrote The Lending Library hoping it could stand alone and the story would feel satisfying in its own right. It’s a huge honor when readers say they can’t wait for more of Dodie or any of the characters. It’s a gift to an author when a reader spends time on one of your books, let alone wishes for another!

What is the best advice you’ve been given about writing or that you’ve learned that you would like to pass along?
If at all possible, write for pleasure—for your imagined reader and for yourself—instead of worrying about whether your book will ultimately be published or sell well. When inspiration strikes, follow it and write without editing or criticizing what you’ve written. Let that come later. If you can enjoy the process, the time you spent will likely feel worthwhile to you and you will learn a lot about writing whether or not your manuscript ends up as a published book.

Could you give my readers a short synopsis of your book, The Lending Library?
When the Chatsworth library closes indefinitely, Dodie Fairisle loses her sanctuary. How is a small-town art teacher supposed to cope without the never-ending life advice and enjoyment that books give her? When she’s as resourceful and generous as Dodie, she turns her sunroom into her very own little lending library.

At first just a hobby, this lit lovers’ haven opens up her world in incredible ways. She knows books are powerful, and soon enough they help her forge friendships between her zany neighbors—and attract an exciting new romance.

But when the chance to adopt an orphaned child brings Dodie’s secret dream of motherhood within reach, everything else suddenly seems less important. Finding herself at a crossroads, Dodie must figure out what it means to live a full, happy life. If only there were a book that could tell her what to do…

Sounds like a fun read! If you’d like to buy the book and find out what happens, here are the ways you can do that.