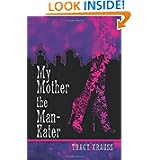 My interview today is with Tracy Krauss who has published two books and has another one in the process. She describes herself as a writer, an artist, a teacher, and a director/drama enthusiast. She currently is a High School teacher of Art, Drama and English. Like many of us, she dreams of some day having the freedom to write full time.

I see you have two books that you have published that are quite different from one another. The first one is My Mother the Man-Eater which is about a self proclaimed “cougar,” her adult daughters and her quest for love. What was your inspiration?
I love characterization and I spend a lot of time developing my characters and their back stories. For this particular novel, I was actually inspired, if you can call it that, while playing the Sims. No, really. I know that sounds rather shallow, but after I had developed these characters and they started ‘interacting’, a whole convoluted story began developing in my head. Of course, things mushroomed from there and I saw the potential for a really great story full of murder, mayhem and (dare I say ‘sex appeal’) while leading to the ultimate climax of God’s redemption and grace.

Cougar Town is a popular TV show now, how is your story different or similar to the show? What would you like your readers to take away from this story?
I’ve never actually watched ‘Cougar Town’, although I have heard of it. I think this book is rather timely in that regard, however. Let’s face it. People are interested in this topic right now. (The Drama-Queens-slash-housewives-of-where-ever …) I think it’s a really fun and fast paced story that is not typical for the Christian market, but, in the end has a strong and moving message of redemption. God can take anyone – even a former prostitute – and use him or her for His glory.

Your other book is entitled And The Beat Goes On which is a tale of intrigue with an archeologist and his discoveries deep in the mountains of Zimbabwe. This sounds like it is a total opposite from the Man-Eater book. Which style is your greatest strength?
Despite what seems like differences on the surface, both books are classified as ‘Romantic Suspense’. Man-Eater has a lot of action, intrigue, murder and mayhem, as does And The Beat Goes On. As well, The Beat has a healthy dose of romance, although not the ‘sappy’ variety, if I may say so, which is actually also the case for Man-Eater (despite the subject matter!) So, stylistically, they aren’t that dissimilar. I like to classify myself as ‘Edgy Inspirational with a twist of romance’.

What drew you to write this story?
As far as the inspiration for And the Beat Goes On, it came out of my interest in what I saw as the discrepancy between evolutionary theory and what the Bible had to say about the origins of the universe. When I first got saved, this was a big issue for me because I had been ‘schooled’ into thinking that the evidence was actually in favor of evolution and that as a Christian, I was just supposed to blindly follow the Creation model without asking any questions. I ended up reading anything I could get my hands on that had to do with the topic. I soon discovered that the so called ‘evidence’ for evolution was iffy at best and often skewed to fit the model – not something proponents want you to know.

This story is actually a sequel to another book I wrote called Play It Again (which is not published yet) in which the main character from The Beat was a child. He was kind of quirky kid who liked rocks, arrow heads, and things. When I started thinking about And The Beat Goes On, I decided to make him an adult. Other than that, the two books stand alone, so nobody needs to worry about reading the first one before the second. It’s also where I came up with the title. I thought it would be neat to continue the ‘musical’ theme. Unfortunately, some folks think it’s a tribute to Sonny and Cher …

I see both books are published by Strategic Book Publishing. I am not familiar with them, though I see their sister imprint Eloquent Books have somewhere around 2000+ authors. Could you tell me how you first heard about them?
I did a ‘blitz’ while trying to find an agent/publisher and ended up with several offers. I liked their contract the best, so I signed with them.

What has your experience been like in working with them?
I have had a very positive experience working with Strategic. They have had some bad press in the past, apparently, but I have found them to be very professional, helpful and forthright in all their dealings with me. Initially, it took several months before I heard anything back from them. Once I signed with them and got the ball rolling, it was probably six months before the first book was released.

Did you contact any other publishers before you got a contract with them?
I looked into straight up self publishing, but decided I didn’t want to go that route. I also had a couple of offers from publishers that were ‘joint venture’ but the cost was really high and I didn’t see it as an advantage over self-pubbing. I have also had some interest and ‘requests for more’ from several agents, and even one of the big publishing houses, but nothing came out of those.

Strategic offers full contract (you pay nothing), ‘joint venture’ (you pay some) and self pub (you pay - period) so they are quite versatile in that regard. Does that mean I am going to stick with them and only them? I’m still in the process of submitting to other agents and publishers. I think it is smart to ‘play the field’ and keep one’s options open.

In working through your first book, what surprises, if any did you encounter in working with your publisher?
I was such total rookie, that pretty much everything was a surprise. I would say my best advice for anyone is to do your homework. I thought I had, but it turns out I only scratched the surface. You really need to take the time to research the publishing industry in general and decide what is best for you. There are so many options out there now from e-pubbing to self-pubbing to how to acquire an agent to publicity … it’s overwhelming at times.

What advice would you give about promoting and marketing an author’s books?
Again, I had no idea what I was getting into so it’s been a very steep learning curve. Strategic has been good about helping with promotions, but gone are the days when you could just sit back and write and let your publisher do all the work of promoting. Unless you’re a million book seller, it just isn’t going to happen, no matter who your publisher is. It is crucial these days to develop an online presence, even before you sign a contract or get published. I didn’t know this and so I have been doing a lot of ‘catching up’, so to speak. You need a website, you should be blogging, and you should be interacting on social media sites. This helps develop an audience and a platform. There really are no shortcuts. It takes a lot of effort.

What do you know now about getting published that you wished you had known earlier in your writing career?
What I said in the last question about building a platform. I was kind of sitting around waiting to be ‘discovered’, but this is not reality for most authors. Self-promotion goes against the grain for most of us – especially those of us that are Christians who have been told we need to be ‘humble’.

What is the best advice you’ve ever been given on writing?
My best advice is to LISTEN to what others are saying – even if it hurts. Often we are so emotionally invested in our own writing that we don’t see the flaws until someone else points them out. I’ve had many ‘ah-ha’ moments where I couldn’t believe I missed some flaw that, as soon as it was pointed out, became glaringly apparent. Having a trusted critique partner or group is a really good idea. This doesn’t mean we bow to every suggestion. At some point you have to know your own voice and go with it. But accepting criticism and constructive feedback is crucial if we’re ever going to get to that place.

Special Promotion for this book...MyMotherTheManEater #contemporary fiction – buy today and also get great bonuses gifts! http://mytinyurl.com/d3srfsw1f1
Posted by Christine L.Henderson at 8:53 AM

Email ThisBlogThis!Share to TwitterShare to FacebookShare to Pinterest
Labels: And the Beat Goes On, My Mother the Man- Eater, Play It Again, Tracy Krauss, writing, writing for publication