Interview with Michael J. Scott author of Jefferson's Road: The Spirit of Resistance 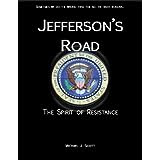 Today’s interview is with Michael J. Scott who is in the process of releasing two books. One is self-published using CreateSpace and the other is being published by Ellechor Publishing House and will be out in 2012. For this interview, I will focus with his current book.
Your current book which is available through Amazon is entitled, Jefferson's Road: The Spirit of Resistance. Tell me why you decided on the self-publish route with this one.
Originally, I wanted to pub Jefferson’s Road through a traditional press, but after submitting to fifty agents, I found no takers. I had one agent particularly interested in the story, enough so that I had to make some rewrites to the story, which strengthened it, but in the end, he declined representation.
Because my critique group here in Rochester includes multi-published authors who’ve given me high marks on the writing and the story, I was confident it had nothing to do with the quality of the work, nor the timing. It’s very relevant to today’s culture and political climate but the subject is controversial. Therefore, I chose to self-pub. I also realized how long it would take a traditional press to turn out the book, and I wanted it available sooner.
Tell me about the plot of Jefferson’s Road.
Jefferson’s Road is about an attempt to spark a second American revolution. It starts with The Spirit of Resistance, which details a plot to assassinate the President on his inauguration as a means of provoking the government into declaring martial law. I’m not advocating armed resistance with the book, but rather exploring what would happen if people did. I think such an action would be an utter disaster for this country.
What is the significance of the title?
The series title comes from Thomas Jefferson's letter to William Smith, in which he argues that the American people must keep the spirit of resistance as a check upon a tyrannical government. He understood that all governments tend toward greater control and less freedom, and actually called for armed resistance as the best guard against it. The phrase "The Spirit of Resistance" is directly from this letter, as are the next two titles in the series: "Patriots and Tyrants" and "The Tree of Liberty."
What type of research did you have to do for the Jefferson's Road?
For one thing, the book has a lot of quotations in it from the Founding Fathers, Revolutionaries, and significant figures throughout history. Some of them I knew. Some I found online. Most I found through a Thesaurus of Quotations I happen to own. I also had to learn about high-powered rifles and police tactics. For this, I turned to a Sheriff’s deputy whose son was in my son’s scout troop. He was able to answer many of my more provocative questions about sniper tactics, DUI checkpoints, police procedure, and the effectiveness of armor-piercing rounds against bullet-resistant glass. I was also able to turn to You Tube videos to get a sense of what different firearms could do.
What other research tools did you use?
Google Earth proved indispensable when it came to researching locations. It allows you to turn on the street view, and literally descend into a 360° photograph, where you can look around and see what’s there. In my book, Jefferson’s Road, I used this feature to go into the streets of D.C. and have a look around. This made it possible to give a more accurate description of various settings, and contributed to the plotting of the story. For example, verifying that there is, indeed, a payphone near a particular hotel in D.C.
What have you learned from working with CreateSpace in publishing this book?
Working with CreateSpace for Jefferson’s Road has taught me the detail that goes into publishing a print book – the work involved in getting a product right. I’ve been over Jefferson’s Road with a fine tooth comb many, many times, and I’m still finding errors in the text. But it’s easier having a printed copy to work from than trying to do it all on a computer.

What do you know now about getting published that you wished you had known sooner?
My only real regret is not studying my craft more intently when I was younger and practicing writing more diligently. I didn’t really start knuckling down until 2005. Five years later, I have a book contract. I wonder what would have happened—where I’d be in my writing career, had I gotten serious about it a lot sooner, say 1995. Or even 1990.
What advice would you give other writers?
Write. Just do it. Butt in chair. Shackled to the floor. Whatever you’ve got to do. Just write. If one story isn’t working for you, put it aside and work on another. Just get the words out until a story grabs you by the throat and won’t let go. I’ve heard it said that a writer has to churn out a million words of dreck before they write something worth reading. So just get those words coming out.
Seek criticism. They say you’ve got to have a tough skin in this business. That’s certainly true. Rejection hurts. But don’t just let someone reject you. Find out why. Find out what isn’t working. What doesn’t click? You have to get serious about actively seeking criticism. The harder and tougher, the better. The worst thing that can happen to me is going to a critique group and reading my material, and everyone loves it. That just means I’ve wasted my time. Unless I get critical feedback that helps me improve, what use is it? You always have to be about improving your craft, your technique.
Give up if you can. If you can go without writing, then you probably should. But if you can’t. If the stories just won’t let go. If the words scream to be written, then do it. And don’t let anyone tell you different. It’s your calling, then. Pursue it with passion, dedication, and an unshakable belief that you’ve got what it takes to not only finish a book, not only get published, not only sell a book, but to become a bestselling author. Don’t let go of that dream, because you have to reach for the stars. You may only hit the streetlight, but you’re bound to go farther than if you just aim for the streetlight.

If you would like to know more about this book or the author, you can go to his blog at www.MichaelJScott.wordpress.com. Click here for a direct link to his book on Amazon
Posted by Christine L.Henderson at 8:00 AM