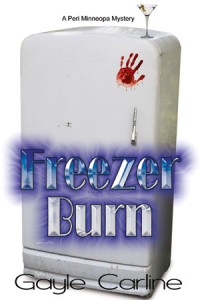 My first question after reading your website has to be is what do you mean when you say you are a maven-in training?
"Maven" is a Yiddish word that means "know-it-all". I'm not Jewish, but I do love learning and hope someday to know it all. In the meantime, I practice, practice, practice.
After being a writer and then being selected to part of a writer’s panel at a conference, how did it feel to be the one giving advice and ideas instead of the one taking notes?
I think anyone who has spent any time writing has figured out what works and doesn't work for them, and I think we could all sit on a panel of some kind and share what we've learned with others. I'm always excited to both share what I know and to learn from others.

Let’s go back to the beginning to your first book, Freezer Burn and your protagonist, Peri Minneopa. First off why that name?
Peri Minneopa began life as a kind of "cartoon character" invented by me and my friend, Robin. Being women of a certain age, we wanted a Superhero that reflected our lives, so we created Peri Menopause, Private Eye. She solves every case by crying, eating chocolate, and bitch-slapping people until someone confesses.                                                              .
When I decided to write a mystery, I took my rather overblown Superhero and brought her down to earth. I surfed around the internet until I found a word that could be mangled into "menopause" fairly simply. The word "Minneopa" is a Dakota word, meaning "water falling twice". There's actually a park in Minnesota named that!
You place the book in Placentia, which is the area where you lived. Are there any people in the book that were based on people you knew?
I don't really like to base a lot of characters on people I actually know. It's too confining to make a real person into a character, because I'd always be thinking, "would X really do that in real life?" The most I do is pay homage to people. Peri's best friend, Blanche, is my interpretation of Suzanne Pleshette (seriously, who would not want her as a BFF?) but other than that, I try to invent all my characters.
I've set my mysteries in my hometown of Placentia because it is a small town in the middle of the big LA/Orange County megalopolis, so I can have some homey, everyone-knows-you, feelings and yet have murders due to the metropolitan nature of the region.
What motivated you to write this book?
I wanted to write a novel because I WANTED to. I began by writing a piece of literary fiction that now languishes at the bottom of my hard drive. It was dreck and I knew it. What I love to read, genre-wise, is mystery. So I went for it.
How many submissions did it take before you found the publisher for this book?
I actually found an independent publisher who wanted this book before it was completed. I met her at a writer's conference and she read my first 20 pages. She loved it. I didn't even get an agent. 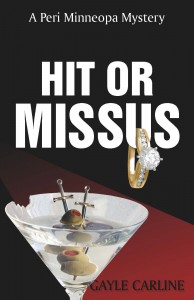 The next installment of the Peri Minneopa story was with Hit or Missus. When you wrote the first story was this one in the back of your mind?
No, every time I write a book, I think it's the last idea I'll ever have. Then I think of something else - usually within a week or so.
How did this story evolve?
It evolved slowly, in fits and starts, and was a difficult child. I had this idea to make the crime revolve around real estate. Then when I began plotting, the bottom kind of fell out of the real estate market. Who would kill over a piece of property? I had to go back and re-group, find another motive for killing someone.
You didn’t stay with the same publisher to do the second book. What made you change and be an independent publisher?
First of all, I never planned to become an independent publisher (also called self-pubbed, Indy author, whatever). I learned a lot from my first publisher, but simply wanted to go in a different direction, so I queried a bunch of agents and other boutique/independent publishers. The agents gave me the same feedback: they loved my book but didn't think it was "right for them at this time." I read Publisher's Weekly, I read all the blogs, I know what's happening in the industry. They were telling me I had a nice, midlist book that was not going to be sellable to the big publishing houses, because the big houses were looking for blockbusters. The other boutique publisher also loved my writing, but couldn't fit it into their schedule.
What surprised you about doing a book through CreateSpace?
My first attempt with Createspace, I paid for their formatting services. They were incredibly helpful. My subsequent times with CreateSpace, I did it all myself and the staff was STILL incredibly helpful. And it was easy.
What do you wish you had known earlier about publishing in working through this book?
My first book with them was actually What Would Erma Do, and I wish I had known it was so easy to do myself. I could have saved a couple hundred dollars.
What are some of the most productive ways you’ve promoted your books that you would like to share with others?
I know this will sound weird, but my biggest advice to promote your books is to engage people. Social media works great, from Facebook and Twitter, to Kindle Boards and Amazon Discussions. No one wants to hear "Buy my book! Buy my book! Have you heard about my book?" They want to get to know you. They want to know you can write well, through your statuses, blog posts, etc. They want to tell you about themselves.
The best thing I've done to promote my book is to leave a thoughtful and respectful response on an Amazon discussion without tagging my books. More than one person has said, "You get it. You're nice. I'm going to check out your books because you're not a spamming spawn of Satan." (to paraphrase)
Do you plan to do any more books about Peri’s exploits?
Yes, I'm currently writing the third mystery in the series. It is still untitled, but I'm really excited about the story. 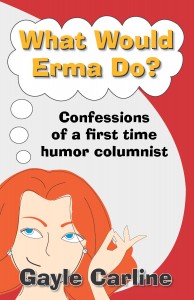 Now let’s move on to the newest book, What Would Erma Do? This apparently comes from your work as a columnist. How long have you been writing a column for the newspaper?
I've been writing the columns since 2005. I write one column per week.
How hard is to come up with a humorous column each week?
Some weeks it's harder than others, but if I can't find something immediate, I can fall back on stories of when my son was little.
Have you ever written something that you thought was funny but fell flat?
Humor is so subjective, but yeah, I've started stories that just weren't working, so I had to scrap them. And there are people out there who don't get my humor at all, so I figure I'll never make them laugh.
What made you decide to write something a little more personal about yourself?
It probably comes from growing up close to my grandmother, who told tales of her life. She taught me how to tell a story.
This book is also done through CreateSpace. Do you plan on continuing to be an independent publisher?
I take each book separately and try to figure out the best path for each. I'll probably continue to publish my humor columns independently, but I plan to query agents/publishers with the next mystery. I don't want to box myself out of any opportunity.
What advice would you give someone who is considering going this route?
Do your homework. Find your audience and court them BEFORE you have a book out. Learn from other authors who have been down ALL of the paths, traditional and independent. Study people like Scott Sigler, Barry Eisler, Joe Konrath, Michele Scott. If you decide to try the independent route, save your money and HIRE a cover designer and an EDITOR.
Could you explain what you mean by courting your audience?
By "courting your audience" I mean, before you have a book out there, ready to go, understand who you think your reader will be, and try to be more specific than, "Oh, I write romance so romance readers will love me." There are so many sub-genres to romance, just like in mystery. Does your romance occur in a lighthouse? There are lots of lighthouse lovers out there. Is there an animal in the story?
Plug into the community, whether it's breed specific or mutt-rescue or whatever. Make friends on the social media sites. Blog about your research. Offer to guest blog on their sites. Understand what makes your book unique and find those people, again, to make friends. It's not about SELL SELL SELL. It's about relationships.
One of my main characters (Benny) in FREEZER BURN is a Dean Martin fanatic. I found Dean Martin lovers, who loved my book so much they kept asking if Benny was coming back for the second book. I hadn't planned on it, but I found a way for him to return and make the story in HIT OR MISSUS even better.
What is the best writing advice that you have received that you would like to share with others?
Gosh, I've had so much that has served me so well. Probably the best advice is to always seek out the critique of others. I think I write really well, but every time I present to a writer's group, they help me make my work better.
If you would like to learn more about Gayle and her writing, here are a couple of helpful links… her website http://www.gaylecarline.com, her blog http://gaylecarline.blogspot.com.