Interview with author Bryan Cohen and the Quest for Happiness 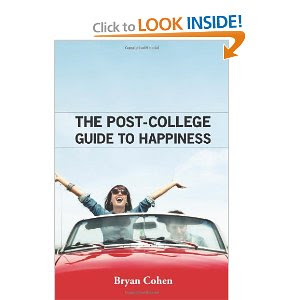 Your most current book is The Post-College Guide to Happiness. You’ve now been out of college for 6 years. When you first entered college what did you think would happen when you graduated? What did you expect your career path would be when you did graduate?
Haha, I probably thought what everybody thinks right after college. That my magical talents would be realized right away and that I'd be an automatic success. I thought that I would find a part-time job and that my acting and improv comedy skills would push me to the top.
What are your goals now? How do you define the term happiness?
Now, I'd much rather create freedom for myself through my writing to be able to do whatever I want. Just in the last two years, I've acted in an award winning play, produced a play, directed a commercial parody, written some books, run in a 10 mile race and done a ton of other crazy things. That freedom for me is directly connected to my happiness. I think in general, happiness is pursuing your passions while keeping yourself centered on the person you want to be. Of course, it's more complicated than that and you'll have to read my book to get my entire opinion :).

Statistically speaking college grads today are expected to have 5 to 7 different careers as opposed to your grandparents who might have that many jobs on the same career path. Do you think this causes more stress or is more freeing in trying something new in a career?
There are so many more opportunities now in fields that are just getting started. As technology moves ahead faster than ever, people are moving on from one career field to another out of necessity. I think it's stressful, but not all of it is bad stress. I think people who have the same job for 40 years can still love their jobs and be happy, but if they aren't happy in the first place, it's going to be a tough road.
How much company loyalty do you see with your friends who are starting out in their careers? How much fulfillment do you think your peers currently get out of their work?
I definitely see my peers in their 20s and early 30s being pretty laid back about company loyalty, though some of them still seem to have the old-world mentality. Good for them, I say, if they love what they do. I'm glad to say that most of the people I'm close with really love their jobs. For those who don't, I think it's partially a matter of not figuring out what they want from life. Once they get that nailed down, they're in a much better position.

How do you decide when to quit a job?
There are so many different cases about when you should or shouldn't quit a job. I think if it fulfills you and provides you with the money you need to live a good life, stick with it. If you have a conflict with a boss or a co-worker, don't stew over it, deal with it. I have several exercises in the book that deal with how to connect more effectively with people, even the annoying ones.
What would you describe as the perfect work environment realistically?
The perfect work environment is one in which people are both trying to help themselves and others, neither of which being at the expense of anybody else's feelings or career. I think it is possible to have something like that, most people just need to get their heads out of their butts :). The best way to survive people lashing out at you is to control your own emotions. The space between stimulus and response as Viktor Frankl pointed out in Man's Search for Meaning, is one that can be worked on and grown. Frankl used this to handle the torture of Nazi Germany in the concentration camps. If he can do that, I think you can handle a little tiff at work.
Does your book cover balancing work and play time? If so what is one idea to create a balance.
I have an entire chapter on "play time," though it's more the immediate gratification type play. There are so many games and websites out there and it's nearly impossible to resist how fun they are. The only issue is that by spending so much time on tiny bits of fun, we miss out on the time needed to develop something much bigger and more fulfilling, life writing that novel or starting that business. The trick in my opinion is to really establish what your purpose in life is. Once you have that in place, you are much less likely to waste time on frivolous pursuits.
One of the topics you cover in this book is how to embrace silence in a world overrun by digital doohickeys. How do people wean themselves away from the constant quest for newer and better tech gadgets?
I think we come back to the fulfillment factor when you bring digital doohickeys into play. I love my phone and my laptop, but I know that nothing I can find on them will bring me true happiness. That comes from the work I put in day in and day out and the people I have around me. The more I tell myself that and the more I believe it, the less inclined I am to waste my time on these devices. If more people lock down their purposes at a younger age, they are less likely to become as technically addicted.

Another topic you cover is making your beliefs inclusive and turning to spirituality for health and wealth. What do you mean about having inclusive beliefs? Do you want your readers to create a belief system by culling through various religions and picking and choosing the parts they like or fit with their lifestyle?
In a way, I think you're right that I'd like readers to create their own belief system to make a sort of buffet of what they like, but I also don't want to mess with the beliefs of my readers. Making beliefs inclusive means getting rid of the "fighting words" aspects of a religion and getting back to the loving and happiness parts.
You can interpret passages of a thousand plus year old document all you want, but do you really think that God would want us committing hate crimes on each other? We need to connect better with each other on multiple levels. Using religion to get in the way of that connection is silly, but I think belief can be used to foster love instead of hate. Like everything else, it just takes a bit of practice.

Your book also talks about turning to spirituality for wealth. My first thoughts in reading that statement makes me think of a charlatan using spirituality for profit but I don’t think that’s your intent. What did you mean?
I think God wants us to have everything we need. Do we need three boats and six cars? No. I think that there are certain types of prayer that are more effective than others. If we are extremely grateful of what we have and put that into a prayer, we are much more likely to receive what we need, as opposed to a prayer in which we wine and moan about our suffering.

There's always someone worse off than you. If you praise God for keeping you from being that person, you may improve your financial situation. Add that up to all of the other positive traits you can gain from studying this book and books like it, and your entire life may be more rich.

That's all for today's interview. If you would like to learn more about Bryan Cohen and his writing, here are the links to do just that...
Website,  Blog,  Amazon,  Facebook,  Twitter
Posted by Christine L.Henderson at 7:00 AM