The title of your book, After the Fact: The Surprising Fates of American History's Heroes, Villains, and Supporting Characters, is relatively long for a book title and it caught my attention. I’m sure that title evolved over time. What were your first thoughts for a title?
We had a tough time coming up with a title that we thought would not only grab someone's attention but also provide a good idea of what the book was about. We toyed around with using the word epilogues in the title or subtitle, but that wasn't really accurate--or very catchy.

We also considered using the title, Second Acts in American Lives, a variation on F. Scott Fitzgerald's quotation: "There are no second acts in American lives." But we eventually decided that there were too many ways to interpret the term "second act"--was it a renaissance or comeback of some sort, or the second act in a three-act play?

Lots of writers want to write fiction first, what drew you to this non-fiction topic?
I've tried writing fiction in the past, but the products of those efforts were uniformly disastrous. I've always enjoyed reading history, particularly the works of Nathaniel Philbrick, Erik Larson, Tony Horwitz and Doris Kearns Goodwin. These authors are all accomplished writers of accurate, entertaining historical works of nonfiction.

This is your second book with a historical basis. The first was Chicago History for Kids:  Triumphs and Tragedies of the Windy City Includes 21 Activities (another long title) How did this book come about?
I was actually pitching a totally different historical work to a local publisher, Chicago Review Press, a book about Chicago history targeted to adults. The publisher wasn't interested in that idea, but they informed me that they publish a series of "for kids" books, including "Civil War for Kids," "Mark Twain for Kids," and "The Underground Railroad for Kids." They invited me to write a comprehensive history of Chicago for the 8-13-year-old audience.

This sounds like a book a teacher would do. Were you ever a teacher?
I used to teach rhetoric 101 as an adjunct professor, but didn't enjoy the experience. I got terrible student reviews. But after the book was published I did a lot of presentations to third and fourth grade classrooms at Chicago public schools. Now that was a great experience. The kids were very engaged in the material and always shared great insights and asked excellent questions.

You have a background as an editor and freelance writer for corporations. Did you act as your own editor on these books or did you hire someone to assist you?
I had a lot of help in the early stages of shaping the concept of the book, mostly from friends and relatives. I'm a pretty meticulous writer, so I usually wrote numerous drafts of each entry before sending them off to a college friend who now lives in Seattle. He was great about reading the material quickly and asking questions about things that didn't make sense or were underdeveloped.

After that, my agent, the acquiring editor at Perigee, and the copyeditor had great suggestions. Ultimately, a person who edits his own work has a fool for a client. The process of invention and generating material is vastly different from editing.

How long did it take you to write each of these books? Was one easier to do than the other?
Each one took about a year. The kids’ book was actually harder because I had to find all the photos myself and take care of permissions. Also, I had to come up with 21 activities, which was a challenge. Also, since it was my first book, there was more anxiety about meeting the deadline and actually finishing a book-length work. 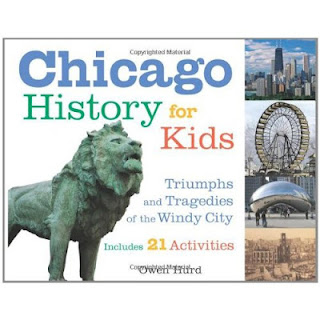 Once you wrote the book how did you go about looking for a publisher and or agent?
It was the other way around. I developed the idea, wrote an introduction, sample chapter and took a stab at what I thought the jacket copy might look like. Based on that, I wrote a rudimentary book proposal, which I used to find an agent, David Fugate. David helped me transform the material I had into a professional book proposal, which he shopped it to his publishing contacts. A couple weeks later, we signed a contract with Perigee.

What have you found the most rewarding of being published – outside of seeing your book in print?
The feedback I get from readers, as well as the reviews I got from my first book, which were all positive. It was very cool, the first time I walked into a bookstore and saw a big display of my books.

What surprised you the most about the publishing process?
Nothing really. Before I was a freelance writer, I worked for two different book publishers in Chicago and I also worked as a copyeditor for several university presses, so I was pretty familiar with the business.
Writing seminars are always telling us about building a marketing platform. What have you learned from using social media sites like Facebook, LinkedIn, Twitter and others?
I didn't do any of that with my first book, so this time around I am going to give it a try.

Find an agent. Get one of those directories from the library and use the index to identify ten agents that work in your kind of material. Write them a great pitch letter and see what happens. I sent my first pitch to six agents, got boilerplate rejections from three and an expression of interest from the other three. Of those, only David pushed me to develop the idea further, and that's why we ended up working together.

Email ThisBlogThis!Share to TwitterShare to FacebookShare to Pinterest
Labels: After the Fact: The Surprising Fates of American History's Heroes, and Supporting Characters, Chicago History for Kids, Owen Hurd, Villains