You Never Know Where Your Writing Will Take You: An Interview with Ellen Byron 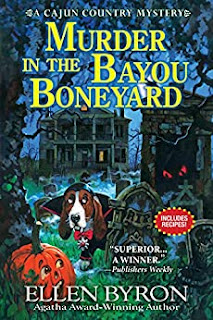 You are a multi-faceted author. You’ve written plays, TV scripts, and mystery novels. How did make the leap from graduating Tulane to writing for TV shows in L.A?
My career has been a series of transitions. I got a degree in theatre at Tulane and pursued an acting career. During my downtime – and there was a lot of it! – I began writing plays and segued into a career as a playwright, supplementing my income by working as a freelance journalist.
I began to itch to advance as a writer, so I took a deep breath and moved to Los Angeles to see if I could break into television. I met another aspiring TV writer and we decided to work as a team. It took a couple of years, but we landed our first job in 1992 on a show called Flying Blind.

How are shows put together? Are they written as a bundle?

No, not at any shows I ever worked on. You managed to get a few scripts ready to go during pre-production. Then once production started, you had to manage the balancing act of breaking stories, sending writers off to write scripts, rewriting scripts about to go in production, managing the show in production, and doing post-prod on shows in the can.

These days, streaming services may pick up a creator-driven show where the creator has written scripts ahead of time, but that’s still not the norm. 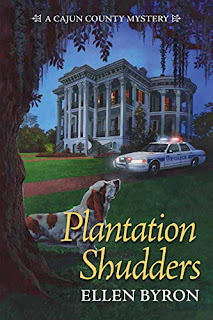 Most plays and TV shows are dialog driven with short bits about the scenes, but books are driven by both. What made you decide to switch to writing mystery novels?

Around 2010, we – my TV partner and I – hit a bit of a TV drought. I was actually ready for a break and a new challenge. A friend started a small writers’ group with only four of us. I loved reading mysteries and decided to try writing one.

The first book I wrote won a William F. Deeck-Malice Domestic Grant for Unpublished Writers. It didn’t end up selling, but I found an agent. While he had it out on submission, I kept writing. The second book, PLANTATION SHUDDERS, became the first book in my Cajun Country Mystery series.

Since you’ve also lived on both coasts and New Orleans, what made you decide to base your novels on the New Orleans location?

I fell in love with New Orleans and Cajun Country when I was a student at Tulane. I set plays in the region and created characters inspired by the Cajun.

My second series, The Catering Hall Mysteries (which I write under the pen name Maria DiRico), is set in my original home turf of Queens. My protagonist literally lives in my Italian grandmother’s old house in Astoria. 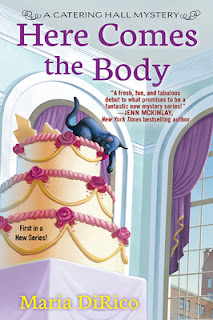 Why the change in names?

I had an idea for a second series based on elements of my own life. My cousins ran two catering halls in Queens, and I thought, wouldn’t a party palace like the ones they had be a great place to set a mystery series?

I put together a proposal that Kensington bought. They asked me to take a pen name for their own reasons and I chose one appropriate to the series – Maria DiRico is my late nonna’s maiden name.

How do you go about plotting your mystery? Do you pick the victim or the murderer first?

I start by thinking of what a great impetus for murder might be. I.e., in LONG ISLAND ICED TINA, my new Catering Hall Mystery, I thought, what happens if a painting stolen twenty years ago suddenly reappears, but in a bizarre place – among the gifts at a baby shower? Then I decide who the victim is and why, which helps me come up with a list of suspects, which leads to plot

What do you think makes for a perfect murder mystery?

I think different people would give you different answers to this question. For me, it’s a combination of a book I can’t put down – I have to read the next chapter and find out what happens next – and a solution I never saw coming. I don’t want to guess the murderer. I want to be surprised. 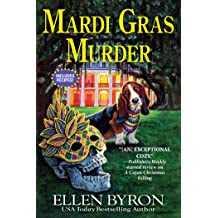 Diving in every day when I’m writing a draft. I’m a plotter and work off an outline, so I’m never going in totally cold. But it’s still terrifying on a daily basis!

They don’t remind me to do any one thing, but what they should remind me to proofread ten times! I’m mortified by the things I miss.

Being nominated for multiple Agatha and Lefty awards. At first, I didn’t know how to handle it. I felt like the guys in Wayne’s World – not worthy! But since I know it will eventually end, I’ve come to cherish and relish each opportunity.

How incredibly kind and supportive the mystery community is. It’s so different from Hollywood, which is super competitive and can be cutthroat.

What frustrates you the most?

That humorous mysteries and the entire cozy genre don’t get the credit they deserve. I’m frustrated by the organizations and conventions that only give awards to serious genres. 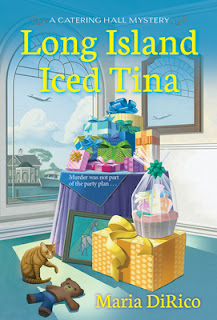 If you get stuck or have a case of writers’ block, write fifteen minutes a day. Anyone can do that. Once you accomplish this, you’ll find yourself getting back on track.

What is the next book coming out?

Can you give a short synopsis for my readers?

In the second Catering Hall Mystery, Mia's newly pregnant friend Nicole plans to hold a shower at Belle View--but Nicole also has to attend one that her competitive (and mysteriously rich) stepmother, Tina, is throwing at the fanciest place in Queens. It's a good chance for Mia to snoop on a competitor, especially since doing a search for "how to run a catering hall" can get you only so far.

Mia tags along at the lavish party, but the ambience suffers at Nicole's Belle View shower when a fight breaks out--and then, oddly, a long-missing and valuable stolen painting is unwrapped by the mom-to-be. Tina is clearly shocked to see it. But not as shocked as Mia is when, soon afterward, she spots the lifeless body of a party guest floating in the marina . . .

And that gets you started for wondering "who done it?" If you'd like to learn more about Ellen's writing, here are some links to get you started