Giving Voice to War Nurses: An Interview with Jo-Ann Power 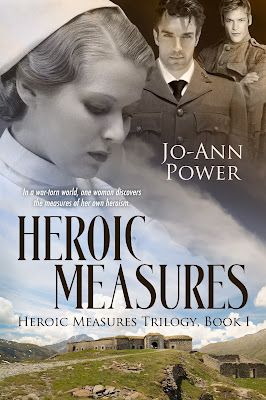 What drew you to the idea of writing historical fiction?

As a child, I dug out my family’s encyclopedia and read up on all sorts of topics. But at age 8 or so, I remember seeing a movie (who knows what it was!) about medieval knights and a king. Then and there, I began combing the encyclopedias for all the kings and queens of England and in the correct order.

To this day, I can recite them all, in chronological order with dates, from William the Conqueror to QEII. My children nod knowingly at each other when discussing English politics, movies or TV series such as The Tudors or The Crown. My husband asks for this list, in order, when we go on long road trips. He also asks for details about the then current wars, crises, riots and which dance was popular at court!

What type of research do you do for your books? Tell me about the process.
Ensuring history lives for readers is a multi-layered process! Knowing the general history of a period is helpful, but it is a gloss. It does not give you the day-to-day details that make a novel intriguing. For example, knowing that the Battle of Waterloo occurred in June 1815, does not tell you:
What the soldiers wore to the battle
How they fought
Where they fought, with what and how did they win
Who died and how
And did any women go to the front?

In other words, the general facts are the tip of the iceberg. Years, literally, of research go into ensuring a historical novel is accurate. I use general histories, biographies, maps, geography books, visits to museums and many trips to England and France to visit homes of those who lived during the periods I write about.

Then to write about what you’ve learned requires a different process. I begin with a premise, usually one I’ve read about in real life.

The kernel of an idea that lights my fires is only the first stop on the journey…and sometimes it doesn’t become a novel for a long time. Why?

I’ll give you an example: Recently while reading a non-fiction book (approximately 6 months ago) about the Congress of Vienna in 1814 (after Napoleon was sent away the first time), I ran across a tidbit about a female spy who worked for the British. They know she existed from notes from her and others who wrote to her and about her, but no one has ever revealed who she was.

This, I knew instantly, was a great premise! But how to make a romance out of it?

And how, I asked myself, to make her the perfect person whom my hero (a former spymaster during that same period) falls in love with years later? Furthermore, how to ensure he did not know her real identity?

To write this novel, I began to make a list of all the things I would need to research:
1. How did she communicate without anyone knowing who she was?
Ah. I’d have to learn how spies coded messages.
2. Was there a master list of attendees? Could I play off that?
3. Of those, who were the spies in attendance whom we do identify ? Why were they not useful enough?
4. What was the nature of a career spy? Was it possible that she was a novice at this? Or had she a long career in spying? If so, who would have recruited and trained a spy, if not my hero who was the spymaster?
A conundrum!
3. What was her official role at the Congress? Might she have been the daughter of royalty? Or the wife of an attendee? (Servants did not attend the secret meetings of the diplomats.)
4. What was her motivation? Was she British? Russian? German? Austrian? Or did she spy for the French? Was she French?
All of this occupies me and while I have my AH-HA! Moments that lead me on, I do not have a plot, a title, characters or crisis…yet.
But I will!

Did you go through the normal process of pitching your book to agents and traditional publishers? How did you find your current publisher?
I’ve been published for more than three decades and know so many in the business that I pitch no one. Nor do I have an agent or want one. For what I write now, small press and indie, I don’t need one. I like the process of self-publishing and the fact that those small presses with whom I publish are well known to me.

What type of publicity do you do to promote your book? What has worked best for you in generating sales?
I am on Twitter a lot! Facebook, not so much. I’ve just begun a weekly one-hour FB party with other authors whom I invite, called TEATIME WITH CERISE DELAND. This time and exposure work very well for me and I’m going to continue!

I take occasional ads online but that is the only type of advertising I do. The online reading community supports me well and finds my work. Promoting myself is, quite frankly, a hideous way to spend my precious time. I get so much more satisfaction spending my hours writing and creating something wonderful that I’m proud of!

I have struggled mightily with not being on FB every day. I’m finally killing that guilt. But telling people about my haircut, my pedicure, my uncle’s birthday just makes me hyperventilate.

I’m on there to talk about books, promote my own when I have a new one or a price break, but I am not there to reveal every little factoid about JP (or Cerise). My time is precious and I think so is everyone else’s. Why any reader would care if I have a hangnail eludes me.

I’d rather be writing or reading someone else’s fabulous fiction!

Because of your stories about the heroic of WWI nurses you have been named the curator for the WWI Centennial site honoring women of the Army Nurse Corps. How did that come about? What drew you to researching and writing their stories?
I learned of these 22,000 women of the Army Nurse Corps decades ago when I lived and worked in Washington D.C. Ever since then, I have researched here and abroad in France their experiences. Facing insurmountable odds, dedicated to saving soldiers’ lives, these women were true heroines. When I learned of plans for a Centennial Commission, I wrote to Washington and volunteered.

Tell me about your book, HEROIC MEASURES.
The book is more historical fiction than historical romance. While, true, HM has a romance, that is not the central theme of the novel.

I hope all who read this will think back into their family and ask if any of their relatives volunteered for the Corps. We at the Commission are trying to build on the national website a gallery of these ladies who gave so much that others might live.

What other works do you have in the process? 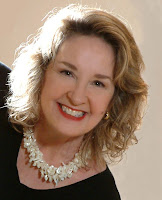 As Jo-Ann, I’m at work on Book 2 in HEROIC MEASURES trilogy, but as Cerise DeLand I’m soon to de but a new series starring American Heiresses who marry English noblemen in the Victorian era, and in February, I debut #2 in my 7 BRIDES for 7 SEALs series, NO GETTING OVER YOU.

Writing was always my childhood passion. Fact, fiction, I scribbled it all constantly. Today, I live a real dream, writing every day. I am grateful to live it.

Thanks for the insight into your writing. If you would like more details about any of Jo-Ann's books, here are two links to get you started.
http://www.joannpower.com
http://www.cerisedeland.com
Posted by Christine L.Henderson at 8:00 AM