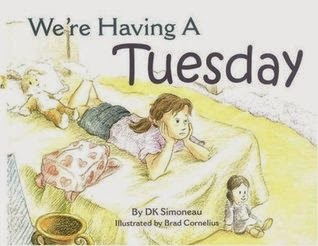 What inspired you to write your debut children’s book?
My first book, We're Having A Tuesday was a direct result of the issues I was facing at home with my two kids after a divorce. I went looking for a picture book that might help, and at the time was unsuccessful finding one. So I decided to write my own.

When did you actually start writing the first book?
Oh, it was many years ago. My kids are now in college. It probably took a day to write the first draft, as it was completely inspired from wanting to help them.

Who encouraged you along the way to complete your writing and publish it?
I have had many people who encouraged me. My Dad was a huge supporter, and always was someone who said I could do anything I wanted.

Since your book is about children of divorce, how much of it is autobiographical?
It is very much based on events in our real life.

What are your children's reaction to the book?
They enjoyed being able to say that their Mom was an author. They didn't enjoy having people think they were the characters in the book!

What type of research did you do in writing this book?
It is a fictional children's story. I didn't do any research to write it, but have since done quite a bit of research in marketing it.

Were there any specific details in that research that surprised you?
Not really.....just the staggering numbers of how many kids are in these kinds of situations.

What made you decide to go the indie route in publishing your books? Did you send your manuscripts out to other publishers or agents prior to that?
The book had been sent out (among others) and it was always receiving incredible feedback and hints that it would be published. But then it always sat. It would sit for months with nothing happening, and eventually a pass for one reason or another. Sometimes it was the timing of someone moving on to another job, or they decided to go with a different kind of book etc.

I started attending a local publishing group and learned about all of the benefits of doing myself. I decided nobody would love this story to its fruition as much as I, so off I went.

How did you go about finding an illustrator?
At the time I was a member of SCBWI, and they had a very beginning of a portfolio type discussion board. I started looking through. I found one illustrator who I was particularly interested in, but their email didn't work. So I posted a comment directly on their board. Interestingly I never did hear back from (nor do I remember their name!) them. But, another illustrator contacted me and asked if I would be interested in looking at his work. I did. I fell in love. I asked him to do a sketch based on just the first few words of the story.  He drew exactly what I had in my head without me telling him what that was, so I figured we were going to work well together, and I hired Brad Cornelius right then.

Did you input your ideas of what you wanted in the illustrations or was it more of a brainstorming session between the two of you?
I let him draw what came to his mind when he read the story. Then if I had some things that I really wanted added, like hearts put on the "very special backpack" I would ask him. But mostly it was his own inspired ideas from reading the story. We worked similarly on Santa's (Zany, Wacky, Just Not Right!) Night Before Christmas. It has been an easy delightful experience to work with Brad.

I see you have won an award for your Santa book. With so many options to enter books for award programs, how do you make a decision as to which ones to enter?
Well we entered just a few, and so far of those that have been announced, we've won in each one. (Some hopefully still to come!). I purposely chose ones that I thought would bring attention to the book from an Independent Press standpoint.

So many people give independent presses such a bad rap. And.....there often times is good reason. But, that doesn't mean books from independent publishers can't be of high quality, and I think ours have been. We also considered what kind of publicity might come of winning such awards, as of course in the end we really just want people to find our books and enjoy or benefit from them.

What has frustrated you the most in the process of putting together your books?
The most frustrating piece is the doors that are slammed because you are a small independent press. Some won't even consider looking at it. And I know that there are some bad ones. But when you are winning awards and going on national television I would think that there might be some consideration for that. 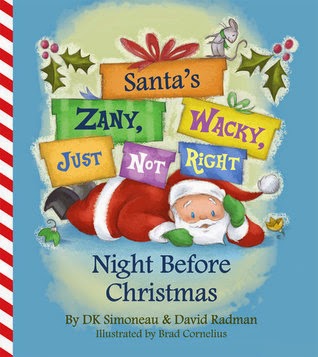 What has pleasantly surprised you in the process?
The most pleasant surprise is the wonderful feedback I get. I have had so many people tell me how much We're Having A Tuesday has helped their kids etc. And for Santa's (Zany, Wacky, Just Not Right!)Night Before Christmas we have had some very inspired reviewers. We had one really fun video posted about it, and one fan who created her own recipe for cookies to go along with it.

I love how contagious the fun has been for people sharing that book. I can't wait to hear more ideas as this book catches on and is shared in classrooms and libraries and so on. I love silliness, and I love how that book inspires it.

What are some of the promotions that you’ve done for your books that have been the most successful?
I have loved using Pinterest to get people thinking about how this book could be used in the classroom or in starting traditions or in White elephant parties.

What advice would you give someone who wants to write children’s stories?
Just write what you love........and don't think because you write it and proofread it that you don't need an editor. Everyone can use an editor!

What is the best writing advice you’ve been given?
Two things, that are similar. One was from my Dad who said to write about what you know. The other was from a publishing coach who recommended that if I decided to self-publish to choose the book that I cared the most about. That way I wouldn't give up, and I would see it through all of the ups and downs of learning. We're Having A Tuesday met both of those words of wisdom for me.

What do you wish you had learned sooner in the publishing process?
Marketing is a never ending job, and that once you have your book in hand, the hard part is only just beginning. That just because you get great publicity doesn't mean people will buy your book. Being on national television gave me some credibility but did not translate to sales.

How much time daily do you have for writing?
I write when I'm inspired. I don't ever write if I'm not inspired. So there might be a day when I write all day and night, and their might be 4 months when I don't write a thing.

What message would you like parents and children to take away from your books?
I think that the messages are both very different. We're Having A Tuesday has a message that no matter what a split family life is like that both parents always love their kids and that they can recall that whenever they like.

For Santa's (Zany, Wacky, Just Not Right!) Night Before Christmas, I would like for parents and kids to stop the business of life and enjoy their time together by reading out loud and just have fun. We work hard, and we need to connect, play and enjoy time with our families.

What plans do you have for other books?
Oh I have dozens of ideas.......will have to see where I am inspired to go next. I've really enjoyed turning Santa into an app for kids, and I have some ideas for those that I would like to further explore. But I also have some other non-fiction types of things I would like to get moving on as well.

Thanks for taking the time to tell me about your writing experiences. If You would like to learn more about these books, here's some options.

We're Having a Tuesday - www.werehavingatuesday.com
Santa's (Zany, Wacky, Just Not Right!) Night Before Christmas - www.purplesantasuit.com
the Santa app: http://store.interactivetouchbooks.co...
www.facebook.com/dksimoneau
Posted by Christine L.Henderson at 7:00 AM