Wriiting Fiction Based on Fact: Author Interview with G.J.C. McKitrick 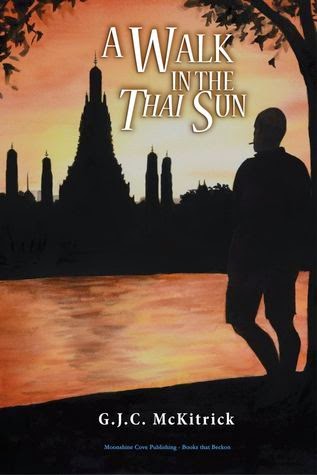 Your debut novel covers a fictionalized account of an event that took place in the area where you worked as a missionary. What made you chose to make that story into a novel?
A year or two before Annie and I arrived in Thailand, a missionary had been murdered in a small Thai town. I don’t know all the details but apparently the missionary had led a Thai woman to the Lord. He began meeting with her one on one to teach her from the Bible. Her husband thought that something else was going on and had the missionary killed.

The resulting Thai press coverage unfairly shed a poor light on Christian Missionary activities in the country. It got so bad that, in an act of self preservation, the missionary organization decided not to pursue justice. His family back home in Canada agree with this because they believed in the mission. The case was never solved. When I learned of it I asked myself a question. What would have happened if the man’s family had not believed the mission and wanted justice done?

Who encouraged you along the way to complete your writing and publish it?
I belonged to a writers group in Vancouver B.C. When I began the novel in the early 90s, they were my support during the entire writing process. The publishing aspect is quite a different matter. There wasn’t a lot of interest largely because the book didn’t fit easily into the established genres. They thought it was good but didn’t know how to market it so they passed. It sat in the bottom of a drawer until a couple of years ago. During that time self publishing became a more viable option. I decided to bring it out and pursue that option but, in the process, Moonshine Cove asked to see the book and then offered to publish it. .

When did you actually start writing the first book? How many rewrites did you do?
The book came out  twenty years after it was written. It has been so long since I wrote the book that I can’t remember much of the details. I was working at the time so the first draft took about two years. It took several more drafts before it was ready but I can’t remember the exact number.

Were there any specific details in the research for this book that surprised you?
An editor suggested that I needed to include more about Thai Buddhism to contrast that with the missionary activity in the book. It may seem odd but during the entire four years that Annie and I were in Thailand, I had very little contact with Buddhist Monks and clergy. Most of that research was done after the fact and I came out of it wishing that  I'd been better prepared when we were there.

What has frustrated you the most in the process of putting together your book?
I have a master’s degree and that means that I can write, at least in academic sense of that word. But most academic writers, however competent they may be, are not story tellers. I had to learn how to tell a story.

What has pleasantly surprised you in the process?
I’m not sure I had any surprises, although getting to know one’s own characters always yields aspects of their personalities that you weren’t expecting.

What are some of the promotions that you’ve done for your book that have been the most successful? What forms of social media do you employ to promote your books?
At sixty-two years of age I’m not that adept at using social media. I’m on Facebook, Twitter and GoodReads but I haven’t maximized any of those platforms. I also have a book trailer on YouTube. I’ve tried a couple of commercial promotional engines that yielded poor results. I’m doing a lot of research at the moment into on-line book promotion. I would say that word of mouth, in the personal contact sense of that concept, has led to the most success so far. I currently have a book give away on GoodReads that has led to more visibility.

Your bio also states you like to write poetry, songs, short stories and stage plays. Do you have one genre of writing that draws you to it more than another?
I find that each idea I get suggests a genre. I finished a short story yesterday because it was the right fit for that idea. At the moment I’m working on a massive science fiction trilogy that I began before I ever knew that “A Walk in the Thai Sun” would be published. That project is so huge that I find I have little time for anything else.

What is the best writing advice you’ve been given?
Have a very clear idea of who your reader will be when you start a project. Pick a genre and write to it.

What do you wish you had learned sooner in the publishing process?
I wish I had paid more attention early on to who my perspective readers might be.

How much time daily do you have for writing?
I average about four hours a day. Lately it has been more because I’m writing to deadline.

That's it for today's interview. To learn more out this author's writing and upcoming works, here are some links to get you started.