Finding Your Writing Voice: An Interview with Krista Davis 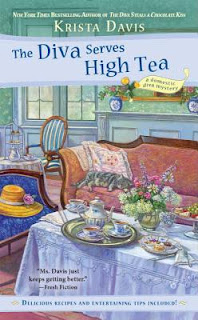 How do you write? From an outline? Do character development? Or are you a pantser?
I’m definitely a pantser. That said, there are some things that I do think out before I begin writing. For instance, I like to know who the killer is and why he’s so desperate that he commits murder. Then I think through the way the murder occurred. That doesn’t end up on paper, but I have to know what happened before I begin to write.

What is the hardest part of writing for you? Starting? Creating a scene? Dialog? Tension?
Honestly, I think it’s different with each book. Some are hard to start. Some seem to write themselves, and some just want to fight me every step of the way!

What does your editor remind you to do most often?
Describe what they’re wearing! LOL!

I have never heard that response before. However, I understand how that can help add more depth to a character or scene. What’s the best encouragement you’ve had in your writing?
The wonderful notes I receive from readers. They are just so lovely. I appreciate each one.

We have all experienced rejection. Give an example of one you’ve had, and how you learned to write past it. 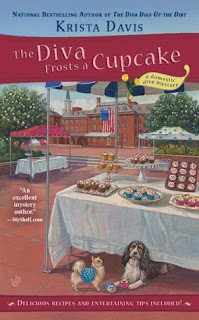 My very first proposal to a publisher appeared to be on track. But when it was discussed at a meeting, it was nipped in the bud right on the spot. Oh no! Happily, the editor felt terrible about that and asked me for some other ideas. That led to the birth of the divas in the Domestic Diva Mysteries!

What do you know now about writing that you wished you had known sooner?
In the very beginning, I was trying to follow all the rules but that made for somewhat sterile writing. Learn about writing, but do it your way.

What is some of the best writing advice that you’ve received or could give?
Don’t give up. A lot of first books don’t get published. But when you think about it, you probably didn’t play the piano perfectly the first time or paint a masterpiece the first time you picked up a paintbrush. Sue Grafton once told me aspiring authors need to hone their craft. You have to keep trying and learn about writing. The more you work at it, the better you’ll get.

What is the next book that will be coming out? Can you give me a short synopsis?
After a year-long hiatus, the Domestic Divas are back in The Diva Cooks Up a Storm. It will be out on May 29th.

Here’s a brief synopsis… When a trendy, underground dinner club leaves some guests six-feet-under the table, entertaining professional and amateur sleuth Sophie Winston hopes she has all the right ingredients to put a murderer on ice. 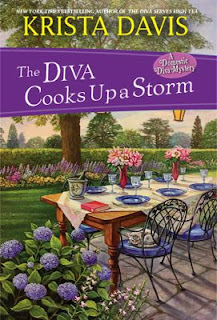 Domestic diva Sophie Winston can whip up an elaborate event in her sleep, but as the hippest hostess, she rarely gets to enjoy the full guest treatment. Which is why her best friend, Nina Reid Norwood, loops her into the latest culinary craze: a pop-up gourmet dinner party. The celebrity chef, the epicurean menu, and the high-profile attendees are all a surprise, turning the decadent dining experience into the hottest ticket in Old Town. Sophie’s just pleased as punch that she finally has an opportunity to join her fellow foodies for some fun.

The posh party proves to be a recipe for disaster when Hollis Haberman sours spirits by bringing his own hot new dish—his young trophy wife. With Hollis’s son and ex-wife in attendance, there may be more heat at the table than in the kitchen. By aperitifs, Sophie discovers Hollis swallowing his last bits of air, and she must scramble to stop a killer before the swanky supper becomes anyone else’s last meal.
Sounds intriguing. Hope my readers’ interest has been piqued as well. If you would like to learn more about Krista’s writing, here are some links to get you started.