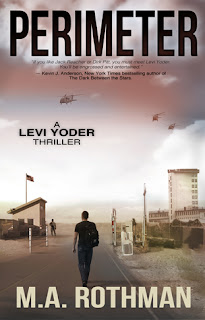 You’ve already published several novels, but what made you decide to write your first novel?
I started mostly as a bedtime story for my kids. It got out of control and I decided to write it down ahead of time. Things spun out from there.

Has that first novel been published? Or is it in the tucked away like many first novels?
Oddly enough, it’s out there somewhere, but not under M.A. Rothman.

Are you active with any writing critique groups?
No critique groups. I found that all too often, especially if the critique group is composed of inexperienced or unproven writers, your feedback may be unreliable. I tend to have beta readers and I look for common trends in the feedback. If someone says too much X and another says too little X, I figure I’m probably doing okay. However if the feedback seems to poke at some of the same things, it’s something I’ll pay careful attention to.

I see in your bio notes that you’ve considered Bruce Willis for the lead of Primordial Threat if it becomes a film? Do you picture actors as you develop your characters?
Rarely do I do that. However, I do tend to have some idea of what kind of person a character represents, and sometimes that translates into an actor we might all recognize. For instance, one of the main characters in Primordial (in fact the hero) is a black gentleman who I always jokingly thought of an anti-Urkel. Urkel, being the nerdy smart kid from TV, my character was brilliant - certainly, but not awkward, upstanding, and somewhat buff. 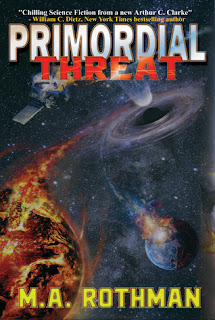 I'm a research scientist, so for me, I have some advantages in that I have a strong background in the sciences. And having advanced degrees in anything doesn't mean much, to be frank. It means you have a strong clue about a very narrow thing, and a good grasp of the way things generally works, but all specialties require research in some sense.

Even a physician, when faced with a new disease, goes to reference manuals. In this case, Google is a godsend. Most of my work has a good bit of science in it, but I've also had security clearances in the past and am pretty familiar with how some aspects of our IC (intelligence community) works, so I can make things pretty realistic.

What has surprised or frustrated you the most in writing/publishing?
I spent a tremendous amount of time trying to get published. Let's just say there are barriers involved where it really comes down to finding the right person for the right story and to do that, it often takes a long, long time. I've had an agent, I've fired an agent. After getting sick and tired of the hassles, I self-published and my first book hit the USA TODAY bestseller's list. So much for the whole traditional publication thing.

What do you know now about writing you wished you had known sooner?
I wish I wouldn't have spent almost five years knocking on the doors of traditional publication. I know almost everyone there. And let's just say that I've soured on the process. 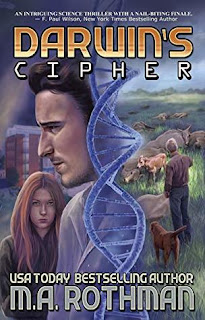 Write what you know/love. I actually started writing epic fantasy, and frankly, it was okay - I did it mostly for my kids, and they enjoyed it, and heck, I even sold probably 25,000 copies over a year or two, but it wasn't what I loved. My true love is technology/thrillers/ current-time hard-SF.

Are there any other points about writing you would like to add?
Writing is about 99% sweat and 1% skill. Most people don't put in the time needed to learn the craft. I call it "sweat equity". Without sweat equity, you're basically saying that you're brilliant and can write something without any study whatsoever and beat everyone who has been honing their skills for years.

That's akin to a 20-year-old going to an NFL training camp, never having played football, and expect to get a position. It takes work. 10,000 hours is what they say before you get proficient at something. And for those who do it quicker, I'm jealous as hell. ;-)

What is the next book coming out?
I have a book 2 coming out in the Levi Yoder series on April 4th.

Can you give me a short synopsis?
As a member of a New York Mafia family, Levi Yoder's role is unique: he's a fixer, a solver of problems, a man whose code puts loyalty above all else, yet he's a man with a conscience.
In THE INSIDE MAN, Levi's search for the kidnapped grandchild of a Japanese 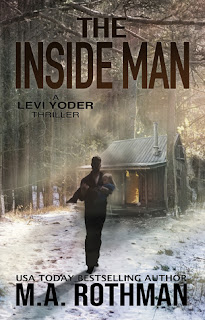 mob boss plunges him into a world filled with chaos.

When he's falsely accused of a heinous series of crimes, the FBI makes Levi an offer he can't refuse: use his mob connections to help investigate the murders of several undercover agents or find himself in jail awaiting trial, without a way to clear his name.

With the threat of incarceration hanging over his head and the life of a five-year-old at stake, Levi finds himself tracking a serial killer who he fears might lead him to suspects that are very close to home. Jail or the life of an innocent little girl, Levi's left with no choice.

That’s all for today’s interview. If you’re looking for a new thriller to read, here’s the link to learn more about Michael’s books:  michaelarothman.com
Posted by Christine L.Henderson at 8:00 AM