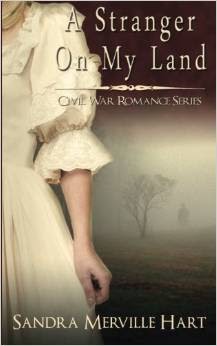 You have a background in writing short pieces for multiple publications. What made you decide to expand your writing to a novel?
I started out writing novels because that has always been my goal. Other authors told me that they had to publish articles, devotions, or short stories first. That's what finally worked for me, too. Publishing short pieces can also earn recognition from publishers and editors.

When did you actually start writing your first book?
I've always wanted to be a writer. In fact I wrote my first book in the sixth grade! I've now written a dozen novels. I believe I started writing my debut novella, A Stranger On My Land, in 2012. It is a Civil War romance, set on Lookout Mountain, the location of the Battle Above the Clouds. I began researching for the story and then traveled to Chattanooga/Lookout Mountain to enhance my understanding. I also visited the Chickamauga Battlefield. I learned so much about this wonderful area. I find it very valuable to visit the location.

Most Christian publishers will not review unsolicited manuscripts from new writers unless they come from the Guild or similar sources. How did you go about finding a publisher?
You're absolutely right. Most publishers don't accept unsolicited manuscripts. Writers conferences are a great way to meet with editors and hopefully receive an invitation to send in your manuscript. I've pitched different stories over the past few years. This particular story ended up being published by the one I originally pitched it to. I have an agent who sends my proposals to editors.

Are you active with any writer’s critique groups?
I belong to writers groups, but only one of them critiques at every meeting. It's very helpful to receive this feedback.

How do you write? Outline first? Individual character development?
I outlined my novels when I first began writing but noticed the story often wanted to take other twists and turns not in my outline. I finally began to write without an outline. I like my stories much better now. They flow better when I allow the characters to show me the story. I always do character sketches on the main characters before I begin.

What type of publicity do you do to promote your book? What has worked best for you in generating sales?
I did a Facebook Book Launch. That didn't seem to generate many sales. I've been a guest on multiple blogs to promote A Stranger On My Land. I've written interviews, writing articles, top ten lists, devotions, and other articles for the blogs. Goodreads giveaways also stimulate a lot of interest and may be the best promotion I've tried so far.

What do you know now about writing/publishing now that you wished you had known sooner?
Everything! Publishing a book was unchartered territory for me. I relied on the wisdom of other authors and things I'd learned at writers conferences, but it was all a huge learning experience. My publisher is a small publisher so I'm sure there are differences with publishing with larger houses, too.

Is this a stand alone book or are you planning a sequel or prequel for any of your characters?
A Stranger On My Land is the first book in a Civil War Romance series. I'm not the only author writing for this series. In keeping with the requirements for the series, I'm going to write another Civil War novel but it won't be the same location or characters.

Many of my readers have requested a sequel to the story. I'm thinking of writing a story that takes place after the war about Carrie's brother, Jay.

What is the best advice you’ve been given about writing or that you’ve learned that you would like to pass along?
Writing is like any other skill. The more you do it, the better you will become. Honing your skills as a writer comes with much practice. Become an avid reader. Read books on the craft of writing. Attend writers conferences and then sit down in front of the computer and apply what you've learned. It's one continuous learning process.

What other books do you have in the works?
I had an idea for a romantic suspense novel, a genre I enjoy reading but never thought I'd write. I pitched it to an editor in the fall who asked to see it. I'm waiting to hear if she likes it.

I've written a three-book historical romance series set in the Smoky Mountains. I'm polishing the first book in the series in readiness to send it to an editor who has requested it.

On My Land. That one will be set in a little town in Pennsylvania called Gettysburg. It will require more research but I'm very excited about the story. The name of my novel is The Seamstress and the Soldier.
That's all for today's interview. If you'd like to learn more about Sandra's writing and her books, here's some options for you.