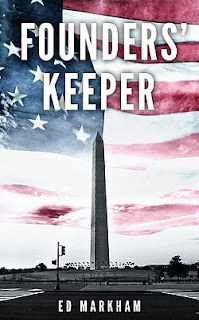 My interview today is with an author who works full time Monday through Friday as a freelance magazine writer and editor and devotes his weekends and evenings to his novels. Read on to learn from his writing experiences.


What drew you to writing psychological thrillers?
I'd been attempting to write something literary for years, and could never get more than 10,000 words into a project without feeling discouraged and bailing out. I was trying to be Richard Ford or Jim Harrison, and that wasn't working. My dad is the kind of guy who reads one or two books a week, mostly thrillers, and he kept encouraging me to give one a shot. I felt from the start I was writing Founders' Keeper for my dad, and that's probably why I ended up making it about a father-son team of FBI investigators.

Who are your favorite authors in this genre?
I was (and am) a big fan of Thomas Harris and Stephen King, both of whom kind of blur the lines between horror and thrillers. And of course I like a lot of our great contemporary thriller writers like Michael Connelly and Jo Nesbo. So I took my dad's advice and tried writing a thriller, and I realized quickly that I was enjoying myself a lot more and the whole undertaking felt more manageable (though still really daunting).
How long did it take to write your first draft?
Probably five months. I remember my wife and I went out to dinner to celebrate. I knew the book needed more work. But just getting to the end and having a complete draft to tighten and clean up felt like a major accomplishment. It still does.

How many rewrites did you do on it?
Oh wow, at least a dozen. The first few were on my own, and then feedback from friends and family and prospective agents instigated big rewrites. The draft my wife and I were celebrating that night at dinner is only vaguely recognizable as the book now available on Amazon.

Founders' Keeper was always about a father-son team chasing a Constitution-obsessed killer, but nearly every detail has been reworked over and over again. My second book, Son of a Gun, was a much smoother effort. By then I (kind of) knew what I was doing, and was able to avoid a lot of the pitfalls I'd fallen into while writing my first book.

What do you think makes for a good thriller?
A lot of it is reader preference. But to even be considered a "thriller," I think there has to be what one agent I spoke with called a "ticking clock" element, or something that urges the characters and plot forward to accomplish or prevent something before it's too late. At the same time, I like a thriller that has some real meat to its middle. You see a lot of books in this genre where, once the initial story and plot are established, it kind of feels like the characters are just running in place and burning pages until everything reaches the big surprise or reveal at the end. I think of it as tap dancing. There's a lot of noise and movement, but nobody's going anywhere. To me, having a cool twist at the end doesn't cut it if the rest of the book was a lot of nothing.

What type of research do you do to give a sense of reality to your stories?
I spend a fair amount of time reading through old transcripts from law enforcement and FBI conferences. Google Maps is a great way to revisit a place and get the feel of it again, or to explore a town or city I haven't visited in person. Wikipedia. Google Scholar.

Like all authors, I'm lucky to have the internet at my disposal. But sometimes I don't know what I don't know, and I make mistakes. I had a reader point out to me that the thing that spins on top of a helicopter is called a "rotor," not a "propeller," which was embarrassing
(but I appreciated hearing about). 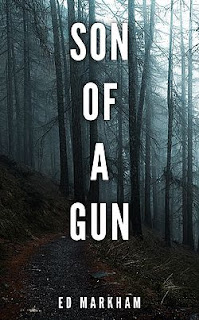 Did you go through the normal process of pitching your book to agents and traditional publishers? What feedback did you get?
I did try the traditional route. It was really a tough experience. Not altogether horrible, but just difficult. After about six months of querying agents and having no luck, I attended Thrillerfest in New York and pitched my book to about 15 agents. The one I was most interested in connecting with accepted the first few chapters, and then requested the whole book. She read it in two days. We spent an hour on the phone, and she told me she loved it and had publishers in mind for it. But she had a couple minor issues with the ending and wanted me to fix those. I agreed, spent three weeks tuning it up based on her feedback, and sent it back to her. She said she was caught up with some existing client projects, but would read the rewrite as soon as she could.

Months and months passed, and eventually I had to give up on her because I'd found another agent who wanted to sign me. The new agent was with a great agency, but was very junior and had never represented a thriller author. He was great, and pitched Founders' to all the big publishers. We received a lot of encouraging feedback. But ultimately everyone passed. My agent wanted to pitch some smaller publishers, but I'd heard some horror stories about authors selling the rights to their books for peanuts, and seeing it fail because there wasn't much marketing or resources to support it.

At that point, publishing on my own seemed like the better choice. All in all, I think I spent about three years querying agents and trying to secure a traditional publishing deal. It was a learning experience, and I don't completely regret it. But it's hard now that I have two young kids to look back at those prime, productive, childless years and wonder how much I could have accomplished focusing on writing new books and publishing them myself.
How do you write? Did you do an outline first? Did you do individual character development before doing the full plot?
I'm a big process guy. I sit down every weeknight at 9 pm and work until I hit 1,000 words. Weekends I do the same thing around midday during my kids' nap times. I did a lot of character planning for my first book. But now the main characters have carried over, so there isn't as much of that. I lightly outline--mostly the first 50 or 100 pages so I know how I'll get rolling. I also try to have a conclusion in mind, though it tends to break down on me halfway through. Personally, I've found it's better to have a premise and an idea of where I'm headed, but to spend most of my time writing, not planning. I get into some trouble this way when I realize after a few days of work that a brilliant idea I had one evening doesn't fit--and needs to be rewritten. But I think letting the story and characters dictate what comes next feels more natural and helps me avoid that tap dancing I mentioned.
What type of publicity do you do to promote your book? What has worked best for you in generating sales?
Like most independent authors, I use sites like BookBub and Robin Reads and many others to get my books out there. Honestly, that's about it. I'm grateful you came to me with this opportunity, because I really haven't been great about marketing my books. I work full-time during the day. And with two kids, I only have a small window of time each day to work on anything relating to my books. I choose to spend that time writing, not marketing.
What do you know now about writing/publishing now that you wished you had known sooner?
A great deal of success in self publishing is about volume and marketing. That's not inherently a good or bad thing. But when I decided to self publish, I had this image of myself writing a book a year, formatting the thing for Kindle, clicking "publish," and waiting for readers to (hopefully) like what they read and spread the word. In reality, I've learned very few authors have much success that way. Some do. But many more find success by churning out a new book every few months and promoting the crap out of it. One way isn't better than the other. But you learn very quickly that the number of books you produce and how much you market them are huge factors when it comes to making money at this.
What is the best advice you've been given about writing or that you've learned that you would like to pass along?
Whether you're writing your first book or your tenth,  daily word goals are indispensable. They're the only way I got through my first book. Even if your goal is modest--say, 250 words a day--all you have to do is hit that number and eventually you'll have a full manuscript in front of you. It's like magic. But to be clear: Editing or revising what you already have DOES NOT COUNT toward your daily goal. You need to write 250 or 500 or 1,000 fresh, piping hot new words every day.
What other works do you have in the process? 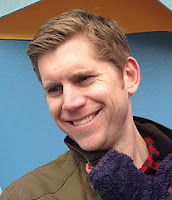 I've finished a draft of my third book, which is tentatively called Ghosts in the Machine. Like my first two books, it features the same father-son team of FBI investigators. In this book, David and Martin investigate the disappearance of an internet mogul-- a Mark Zuckerberg type. I'm hoping to have it published by the end of July. I'd originally wanted it up by the end of this month, but my wife and I had our second son a few months ago, and that's really slowed me down. (He's not the sound sleeper his big brother was at that age.)
Thank you, Ed for all your insights about your writing and publishing experiences. If you'd like to get a start on reading his series, here's a link to his website...  EdMarkham.com.
Posted by Christine L.Henderson at 9:00 AM