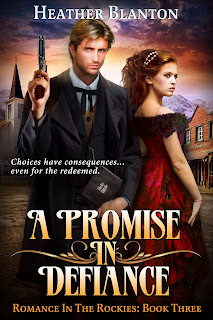 My interview today is with Heather Blanton, a bestselling author of several Christian Westerns, including the Romance in the Rockies series, which has sold over 40,000 copies. She was drawn to writing Westerns because she grew up on a steady diet of Bonanza, Gunsmoke, and John Wayne movies.  She loves exploring the American West, especially ghost towns and museums. She has walked parts of the Oregon Trail, ridden horses through the Rockies, climbed to the top of Independence Rock, and even held an outlaw's note in her hand.

What drew you to writing historical romance in a western setting?
My dad was my hero. He could quick draw and shoot a hole in a quarter. Very impressive to see, trust me. So when we watched Westerns together, I always thought, “Wow, my daddy can do that! He’s just as tough as any of those guys.” Plus, he taught me to shoot when I was 5, about the same time I started writing (with a little help from my editor-mom). I lived in Florida when I was young and, man, did I ever dream about those cold Rocky Mountain nights. Roll it all together, and I grew up loving the Western and the West!

Was there a specific author that you read that made you think, "I could write that"?
More like, “Wow, I wish I could write like that!” LOL. I’ve always been a huge fan of Louis L’Amour, of course, but I also idolize Francine Rivers. If only I could touch the hem of her garment maybe some of her writing mojo would rub off!

What type of research do you do in writing something with a historical base?
I have been very blessed to travel much of the West, with a focus on Wyoming and Colorado. I read state history like a man starving for food. Can’t get enough of the lynching and mine explosions apparently. And since this is a life-long interest for me, I’ve watched movies and documentaries since I can remember. Literally, casual reading for me is a book on Doc Holliday. 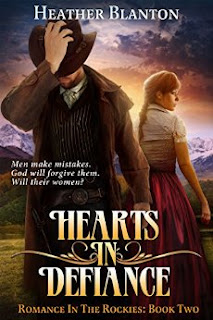 Tell me about the process. How much “artistic license” do you use in creating locations for your stories?
As far as locations, I get darn close and try not to monkey around with real geography if I can help it. In Hearts in Defiance, though, I did shorten the distance between a few towns, and I mentioned that in my Final Word at the back of the book. More often than not, readers point out how they’re from the areas I write about and they love the accuracy. If I get a complaint (and, praise the Lord, there are few), it’s usually about anachronisms in language.

Since I see my books as something between a historical Western and a tribute to the Westerns that made TV fun in the 50’s, I don’t write pristine 19th century dialogue. As it is, my Western jargon gives my editors fits! If I wrote, “Let’s have some Arbuckle’s before we get into our best bib and tucker…” I think a few readers might spend more time googling phrases than reading!

How did you go about finding a publisher?
My first book, A Lady in Defiance, made it all the way to the contract meeting at a MAJOR Christian publisher. Much to my and my agent’s dismay, the sales department shot us down; they said my sales projections were too low. Just before that meeting, I self-published the book with the goal of selling 200 copies for my Relay for Life team. ALID went on that year to sell over 8000 copies. To date, it has sold nearly 40,000 copies. The big Christian publishers, however, still had no faith in the book or the sequel. To make a long story short, I went with Rivulet Publishing, a small, niche publisher who trusts me to write what I think my readers want to read. So far, we’ve been on the money. I make a substantially higher percentage of sales here than I would have if I’d gone with the big dogs. I guess my first piece of advice, then, would be to determine whether you want prestige or a way to write what you want and pay the bills, too.

Second, network. Literary agents Steve Laube and Chip MacGregor are famous for saying, “Get thee to a writers conference,” and they aren’t kidding. I met the editor there who got me my agent, and I made friends for life. I’ve met dozens of editors, agents, and authors and had wonderful conversations with them. My favorite event is the Blue Ridge Mountains Christian Writers Conference. It’s all very personal and intimate there.

How long did it take you to write your first book?
It sounds like a long time now, but from concept to publishing, it took me 4 years—those were really informative, formative years for my writing. 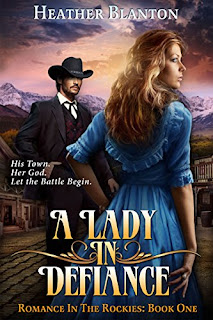 How many rewrites did you do on it?
I took my first draft of A Lady in Defiance to the BRMCWC for a critique. I had written the whole thing in Omniscient POV. A big no-no for a beginner. So I re-wrote it in third person. However, a lot of people told me to substantially limit the POVs to no more than 3 or 4. Well, Defiance is an ensemble piece. It reads like a TV show: multiple story lines, multiple POVs, and there was only so much “dumbing down” I was willing to do. I’m glad I listened to my gut. The story of three sisters trapped in a rowdy mining town needed to be told a certain way.

Who helped you with the editing?
My sister, God love her, paid for my first professional edit with David Webb, former Sr. Acquisitions Editor at Harvest House. He was very encouraging and believed in me enough to recommend me to an agent.
Did you ever want to give up writing your first book?
Yeah, right after my first rejection letter. And then again when the major Christian publisher decided not to make me an offer. Yet, I kept going, and that’s the secret to success—plugging along.

How long does it take you now to write a book?
I can do a thousand words a day pretty easily and still raise kids and do laundry. So, 3-4 months for a novel with limited POVs. Longer for my Defiance series because I have those stories within the story.

How do you write? Did you do an outline first? Did you do individual character development before doing the full plot?
OK, this is weird, but I’ll throw it out there for what it’s worth. I start with a scene. One, single scene. It’s a mushroom, you could say. The other scenes pop-up around it and I sort them into a novel. I do a little outlining, a little writing by the seat of my pants. Somehow it works. I’ve tried a detailed outline before. It helped some, but I careened off the path a lot, which I found frustrating. 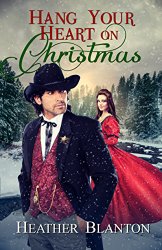 What are some of the more difficult aspects of writing historical novels? Have other novels been started and stopped along the way?
It’s the little details that make a novel seem real and authentic to a reader. You can’t just dream those up. I am a firm believer a historic writer should be extremely well-versed in a century, and especially a decade. I think this is the sort of thing that makes an author tuck a book away for years because they feel overwhelmed by the unfamiliar. I’ve been fortunate to finish everything I’ve started, but I sure do have some stinkers hiding in the closet.

What do you know about writing/publishing now that you wished you had known sooner?
Work social media as if your life depends on it … because your career does! Having said that, I love Facebook. I actually know and like most of the people I’m friends with on there. I don’t accept every friend request. I don’t have time for debates so I stick to letting in like-minded folks. Facebook is my happy place and my friends are really good to me. They share anything I ask them to. They are awesome.

What other books do you have in the works?
I wrote a script for my first book, A Lady in Defiance. It has been viewed by some producers in Hollywood and I am working with award-winning scriptwriter, Zena Dell Lowe, tweaking it because it has really conjured some interest. Brian Bird, a partner at Believe Pictures, wants to see it, and Hollywood producer Mark Headly is extremely interested in the possibility of producing it. Still lots of hoops. I’d say the project is moving in the right direction, for sure.

I am also planning on releasing book 2 in the Love and War in Johnson County series, as of yet unnamed. And I’ll also be releasing two novellas for Christmas, one in a trilogy from Rivulet Publishing!

What is the best advice you’ve been given about writing or that you’ve learned along the way?
Attack the senses and you will drag your readers by the hair into your story. Draw blood; fill their nostrils with smoke.” Brutal but brilliant and I try to write by it.

That's all for today's interview. If you'd like to know more about Heather's books and upcoming projects, here's some links to get you started
http://amzn.to/1r4oUQk      https://ladiesindefiance.com/
https://www.facebook.com/heatherfreyblanton
https://www.facebook.com/authorheatherblanton/
https://twitter.com/heatherfblanton
Posted by Christine L.Henderson at 10:00 AM