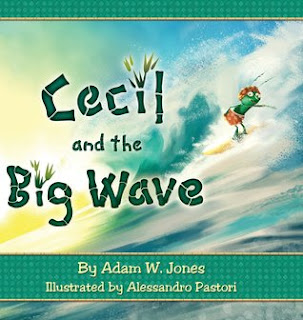 What made you decide to write your picture book?
I got married at 42 and now, at 53, have two young daughters...5 and 8.  My wife and I read to them nightly, so I have read a ton of children's books.  My oldest began asking me to tell her "Daddy stories" and Cecil and the Big Wave was one of them.  I just knew that Cecil was as good, or better than half the children's books I read, so I took the plunge.

For my Cecil book, I did want control and was able to collaborate with the WHB designer and choose the illustrator.  I had already laid out Cecil and had my own sketches, but I am no illustrator.  WHB tweaked my design and Alessandro interpreted my sketches.

I like the hybrid approach because your work has to be good enough for WHB to accept it, but it's a real collaboration from acceptance to the finished product.

Tell me about your experience with your illustrator. I know you probably had your own ideas for the characters. How hard was that to come to an agreement on what they would look like?
Alessandro did a great job of interpreting my sketches and he really brought his own style to the book.  He lives in Italy and I am in Chapel Hill, NC, so everything was via email.  Through simple English and some Google searches, I was able to convey my wants and he was able to understand my direction.

How long did it take you to write the story? How many rewrites did you do on it?
The original story took a few hours to write.  The re-writes took a good month of back and forth with my editor.  We didn't want the story to be too long or too short and it needed to flow well with the illustrations.  In the end, I think we got it right.

What’s the best encouragement you’ve had in your writing?
When I finished my first novel I was very apprehensive about putting it out there in the world.  WHB suggested we send copies to a third party review service to gauge the reaction to the work.  All five reviewers rated Fate Ball 5-stars and that gave me the confidence to go ahead and publish it.  Other than a few outliers, Fate Ball has been received extremely well. Confidence is key.

What do you know now about writing that you wished you had known sooner?
I wish I had more confidence in myself years ago rather than waiting so long.  Writing is a process and part of that process is being mature enough to know when the time is right.

What is some of the best writing advice that you’ve received or could give?
Jump!  Just put yourself out there and give it a go. Write, write and write some more.  And, you need to experience life so you can bring some real experiences to your stories.  It's a cliche now but just do it.

Are there any other points about writing that you would like to add?
The best books evoke emotion.  Write with emotion and it will show in your work.  I wrote much of Fate Ball through blurry, tear soaked eyes and I am I hearing from readers that the book moved them to emotion too. Cecil is the same way...feel the emotion, the sadness, and the joy.  Your readers will appreciate it.

What is the next book that will be coming out? Can you give me a short synopsis?
I am planning on a Cecil the Littlest Ant series.  The next Cecil will be out next summer and I hope to release one each summer for the next five years.  The next Cecil will be Cecil and the Soccer Match. This will be another good sport, confidence building story.  All of the Cecil stories will be based on an original "Daddy story"...experiences I had growing up. Also, I am working on my next novel, which I hope to have out by next summer.

If you'd like to learn more about Cecil's adventures, here are some links to get you started.  www.adamwjones.com and www.wisdomhousebooks.com
Posted by Christine L.Henderson at 10:00 AM